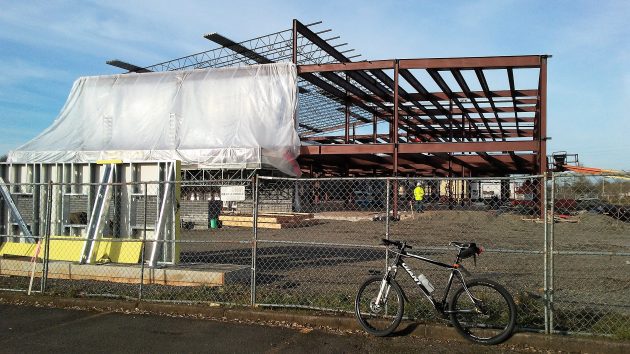 MLK Day was no holiday on the police headquarters construction site.

There’s no apparent connection, but as Albany is building its new police department headquarters, serious property crime in the city seems to have taken a substantial drop.

I stopped by the construction site at 2600 Pacific Blvd. S.W. on a ride Monday, Martin Luther King Day, before the rain that was forecast for this week had a chance to start. (Even though it’s a government project, the crew was working on that holiday.) One thing I had not noticed before is that the back part of the two-story building will have a slanted roof. Smart design, if you ask me, in a town that gets 40-plus inches of rain a year, most of it in winter.

Then on Tuesday, the police department emailed its quarterly report to the community. Among other items of note, there’s a table showing that property crime in Albany declined 14 percent from 2015 to 2016. The table, I learned Wednesday morning, covered only the first 11 months of each year. For the full year, the decline was 12 percent.

Both business and residential burglaries went down from year to year. The biggest drop, though, 24 percent according to the updated table I got this morning, came in thefts from vehicles. There were 402 such crimes in 2015, and last year the number was down to 304. The police keep telling people to lock their cars and not leave stuff inside, so perhaps this advice has finally begun to sink in.

No such decline, though, took place in reports of thefts of entire vehicles, which happened 110 times in 2015 and went up to 113 last year.

Violent crime in Albany, while relatively rare, stayed pretty much the same from year to year, sad to say. Only robberies spiked 31 percent, with 21 incidents in 2016.

The overall drop in serious or “Part 1” crimes, according to Chief Mario Lattanzio, probably puts Albany at or below the average Oregon crime rate. And considering how much above average Albany had been in property crimes before, that’s a big deal.

None of this has anything to do with the new building the police department will move into come September. There are 61 officers and 29 civilian staff, according to the police department’s web site. By the fall, there might be more. The department is recruiting officers, and to that end it’s offering a $4,000 signing bonus, plus another $4,000 bonus after two years. (hh)

This is an updated and re-edited version of the original story published Tuesday night. (hh)