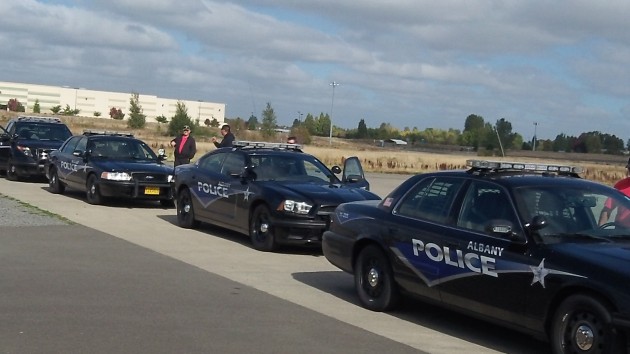 Albany patrol cars lined up for a Citizens’ Academy demonstration last fall at the state’s police training site in Salem.

Albany voters get a chance in May to renew the city’s police and fire tax levy a year early, and if they do, about $80,000 of the first year’s amount will not be siphoned off for urban renewal.

The rate of the yearly “local option” levy — outside the limit set by Measure 50 in 1998 — would remain unchanged at $1.15 per $1,000 of assessed value. The levy, totaling about $18.5 million over five years ending in 2020-21, would supplement other property tax funding of the police and fire departments.

The Albany City Council Wednesday unanimously passed a resolution placing the measure on the May 17 primary election ballot.

But since it was approved in 2012, the legislature changed the law to provide that newly approved special levies like this are exempt from losing some of their proceeds to urban renewal districts such as the Central Albany Revitalization Area (CARA).

So, if the levy amount is collected under what voters approved in 2012, about $80,000 of its estimated $3 million in proceeds in 2016-17 will go to CARA. But if the old levy is replaced by the one on the ballot this May, CARA no longer gets a share.

That was one reason the council called for a renewal election a year before the existing levy expires. The other reason is that in case the voters say no in May, the council has several chances to ask again before this extra tax funding ends.

I wondered about a technicality: voters authorizing a replacement levy without at the same time rescinding the levy approved in 2012. City Attorney Jim Delapoer says he’ll look into it but there’s no way — no way! — the city would allow the tax to be levied twice in the same year. (hh)

3 responses to “Albany police and fire levy: May vote”