Police and fire stations: Another step 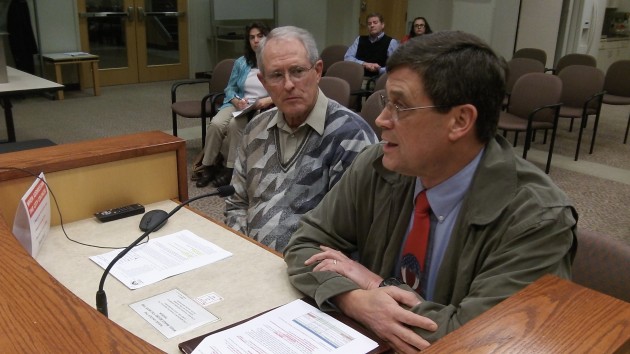 Next time, the Albany City Council can probably count on at least three more votes than it got the last time for a bond issue for a new police headquarters and downtown fire station. But it is hoping for a lot more than that.

Burright and retired state Sen. Frank Morse, R-Albany, Wednesday asked the city council to accept the recommendations of a special review committee they co-chaired on the police and fire plans. The council thanked them and all the panel’s members for their long and tedious  work — 15 meetings over several months, totaling some 450 person hours in the reckoning of Councilor Floyd Collins — and voted unanimously to accept the report.

The council also got an update on what the design consultant chosen for the combined project, Mackenzie of Portland, will charge: $112,850 for a preliminary architectural and design services for the police station, and $105,550 for the same work on the fire station. That work is supposed to be finished by February, when the council plans to put the smaller bond proposal on the ballot for a May 2015 election.

If the voters approve the  bond, Mackenzie then would finish the designs for both buildings and provide services during construction. In total the firm would charge $1,061,150 for working on the police project and $721,730 for the fire station, including the preliminary designs.

The Morse-Burright committee recommended that the combined project costs be no more than $24.4 million, and that $1.4 million come from the CARA downtown urban renewal program, $5 million from the city’s Pepsi settlement fund, and $18 million from the bond issue. They also recommended that any savings in the projects be used to reduce the bond amount so that taxpayers would bear less of the cost. (The $24.4 million estimate of the total cost does not count the price of the land the city bought for the new police headquarters on Pacific Boulevard and the expansion of the fire station on Lyon Street.)

The council created the Morse-Burright committee to assure voters that the projects would get a critical review by knowledgeable people other than city officials. That part of the plan has worked as intended. Whether the overall strategy works we’ll find out on the evening of May 19. (hh)

5 responses to “Police and fire stations: Another step”