Police and fire issue: What is art? 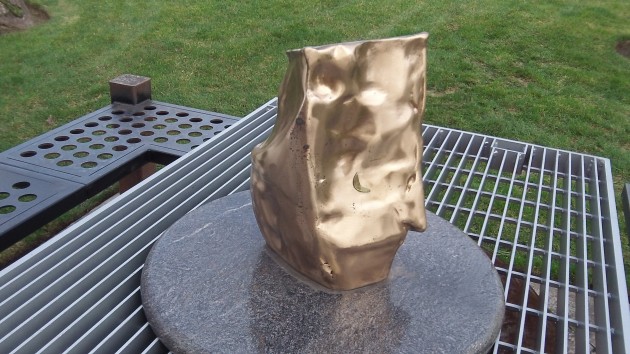 No one’s talking of anything like this item in a private sculpture park at First and Lyon.

What is art, exactly? It’s an old question, and it’s coming up before the Albany City Council. An Albany ordinance provides that 1 percent of the cost of new city buildings be spent on art. So what about the planned new police department and downtown fire station, which together might cost around $24 million?

The budget for the projects allocates a total of $200,000 for “art” in both, about $127,000 for the police headquarters and the rest for the new Fire Station 11. Some council members think that amount is excessive, considering that the council tried to assure voters before this year’s $18 million bond election that these buildings would have no unnecessary frills.

One question is: 1 percent of what exactly? At Wednesday’s council meeting, Councilors Floyd Collins and Rich Kellum suggested calculating the required 1 percent based on the costs of only those parts of the buildings open to the public. The council seemed to go along with that idea, but it’s not clear what that calculation would yield. There was no vote, and Mayor Sharon Konopa wanted to wait for the Albany Arts Commission to come up with a recommendation on the general question of art for these buildings.

The city engineering staff, meanwhile, has been working on the practical idea that some required features of the buildings and grounds be built so that they can count as art. Storm water facilities, for instance, could be designed so they look like gardens with an art-like flair. Also there was talk that a wall in the police station holding portraits of honored officers could be counted as art. In the fire station, displaying a restored antique fire engine might serve the same purpose. One thing no one is talking about: Statues or sculptures.

The council heard from the arts commission on the merits of public art, and no one disagrees. But whether it’s art of just decoration, the only items along that line are sculptures at the public libraries and a downtown private park, a metal flagoverlooking the City Hall plaza, and some murals on downtown walls. (No one talks about the murals any more, but when they went up they did not win unanimous acclaim.)

The question of police and fire station art will have to be settled by the end of September so that the designs of the buildings can proceed on schedule. (hh)

9 responses to “Police and fire issue: What is art?”