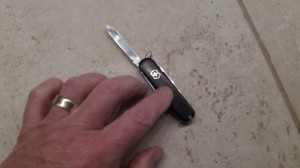 An instrument of terror?

It’s hard to believe some of the nervous nellies in the airline business. They are pressuring the Transportation Security Administration to reverse its decision to let passengers keep their small pocket knives starting April 25.

From the start of civil aviation until shortly after 9/11, passengers could carry all the knives they wanted and no one remembers that as a problem. (Nobody worried about even guns on airplanes until the spate of hijackings to Cuba and other places half a century ago.)

Then, on 9/11, the al-Qaida hijackers used box cutters to kill crew members and take over their planes. Since then, cockpits have been hardened, and marshals are in the cabins. Today even box cutters would not enable hijackers to take over a plane. And certainly dinky little folding knives could not be used to do so either. (I’ve used box cutters to dismantle big boxes so they’d fit in the recycling bin. I tried using my knife first, and it wasn’t up to the job.)

The Associated Press reports that ending the knife ban has met opposition from flight attendants, federal air marshals, some pilot unions and even some insurance companies. They say knives could be used to harm flight attendants and others. If knives are so dangerous, what about life away from planes? Should we ban pocket knives on trains and in movie theaters, concert halls, college classrooms, sports arenas and work places too? Of course not, and the TSA should quit confiscating them from passengers before they board a plane. (hh)