PO stands for ‘passport office’: Why? 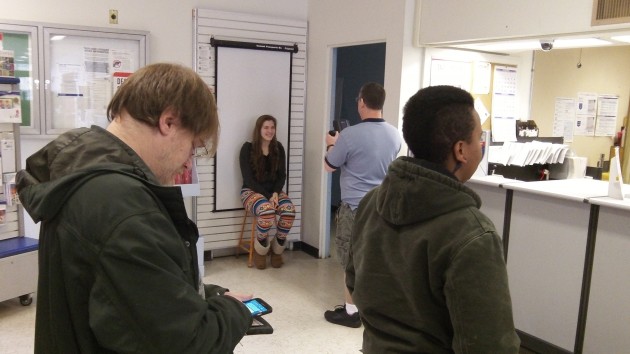 Passing the time while a PO clerk takes a passport photo.

Here’s a suggestion for the Albany Post Office: See if you can offload the job of taking passport applications to some other agency. If you did, people visiting the post office for postal business would probably not have to wait as long.

On Monday during the lunch hour may have been the exception. Sixteen people were waiting in a line stretching to the outer lobby. Two employees were working the windows. Their telephoned plea for more help up front produced no results while one of them went through the passport procedures with what appeared to be a mother and daughter. When the forms were filled out and signed and stamped, it was time to administer the oath, which the women took in full view of the assembled postal patrons. And then a passport picture had to be taken. And the set of results had to be carefully cut apart with scissors, and so on. Quite a procedure, and it was carefully done, as of course it must be.

I’m sure it’s nice to be able to handle passport business at a local office, but does it have to be the post office, as it is in Albany, Lebanon and Harrisburg? In Corvallis, for example, there’s a better system. At least it sounds better from the viewpoint of a guy standing in line waiting to mail something.

If you want to get a passport in Corvallis, you go to the basement of the county courthouse and visit with the people in the elections and passport office. In Albany, the Linn County Clerk’s Office is on the second floor of the courthouse, and it is staffed by very helpful employees. Why don’t we shift the passport business there and let the seemingly short-staffed PO deal only with the mail? (hh)

Passing the time in line: Good thing there are smartphones.


One response to “PO stands for ‘passport office’: Why?”