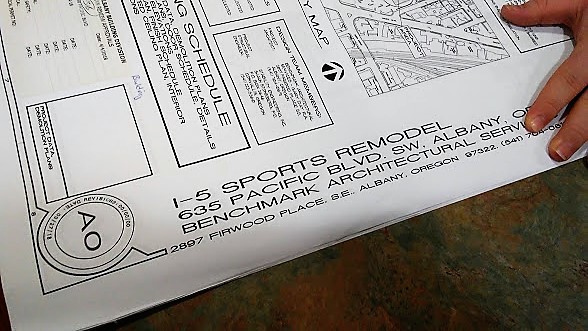 Last week I reported that demolition had started inside the old Albany Safeway to prepare the building for a new business. I was unable to identify the prospective tenant because no one would tell me and I had failed to take the most obvious step: Look at the plans.

Monday I remembered to take that step, and you see the result above. The plans on file at City Hall say the building at Pacific Boulevard and Calapooia Street is being remodeled for I-5 Sports, a dealership in all-terrain vehicles that now has a store at Commercial Way and Santiam Highway, just east of I-5. The company also has a store on S.E. Third Street in Corvallis.

The old Safeway’s owner didn’t want to tell me for whom the former supermarket was being remodeled because the city permits were not yet final. They were applied for last Wednesday, and it typically takes the city building staff two or three weeks to check them, perhaps ask for revisions, and then approve them.

The plans show a big showroom, a service area, and several offices, among other features.

When the bike and I made our way to I-5 Sports in Albany on Monday to ask about the timing of the move and other details, I was told I had to talk to the boss but he wasn’t there. I called later and left a message but didn’t hear back.

The Safeway was built in the 1960s. Safeway left it and moved to 14th Avenue in 1999 but for years kept up its lease to prevent a competitor from opening there.  Weeks ago I was told that the owners were negotiating with a prospective business for the space, but it would not be a grocery.

Now that the no-grocery prediction is confirmed, the news likely disappoints residents of southwest Albany who, in online comments, had been hoping for a supermarket closer to where they live. (hh)

Postscript: I heard from Larry Sanders, the boss at I-5 Sports. The plan is to consolidate the Albany and Corvallis stores in the remodeled old Safeway building. He has many more units of ATVs stored off-site now, so the old supermarket space will not seem too big for his inventory. 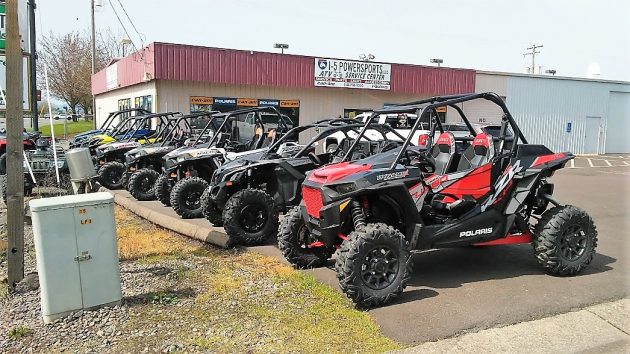 The I-5 Sports store on Commercial Way.