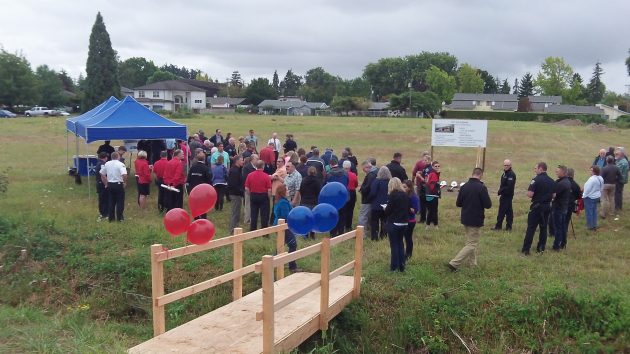 These people are standing on what will be the front parking lot of the new Albany police headquarters.

Everybody in Albany surely knows about the Albany fire and police buildings on which construction is starting now. So I thought, anyway. But on Tuesday somebody working in a downtown shop asked me if I knew what was going on where the old downtown fire station used to be. So I guess a recap would not hurt.

After years of planning and two bond elections, the city held the obligatory groundbreaking ceremonies Tuesday, first for the replacement Fire Station 11 at Lyon Street and Baker Avenue, then in the vacant lot at 2600 Pacific Blvd. S.W. where the new police headquarters will rise. I missed the fire hall occasion because of my Tuesday morning gig on KGAL in Lebanon, but had time to get my bike and make it to the police ceremony. (The bike because there’s no parking at the police site and I didn’t want to walk from the parking lot at Memorial Stadium.)

Gerding Builders, of Corvallis, has the $19,500,200 contract to put up both buildings. (The fire hall is costing $7.4 million, and the other $12 million and change go toward the cop shop. Gerding will work on both projects at the same time and expects to finish both in time for them to be in use by September 2017. (Completing a construction hat trick, Gerding is also building the Albany Carousel downtown.)

The new fire station will straddle Sixth Avenue on the east side of Lyon, and one block of Sixth between Lyon and Baker is being closed. The closure takes effect today (Wednesday).

After first rejecting a bond issue for $20 million-plus, Albany voters approved an $18 million bond to pay for most of the twin projects. The rest of the cost, which totals roughly $24 million including land acquisition and design expense, has been covered from other city funds, mostly from what was left of the Pepsi/Gatorage settlement of 2010. (hh) 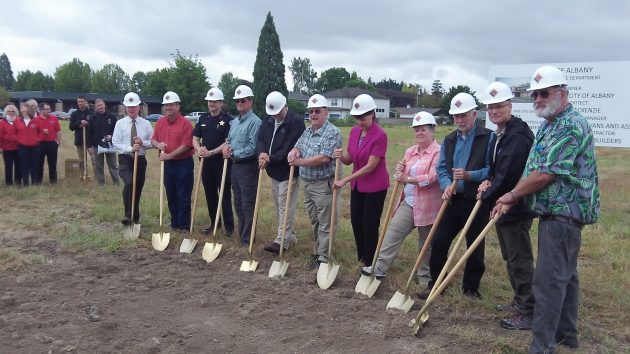 This looks like a competition for who can best carry off wearing an unaccustomed hard hat. 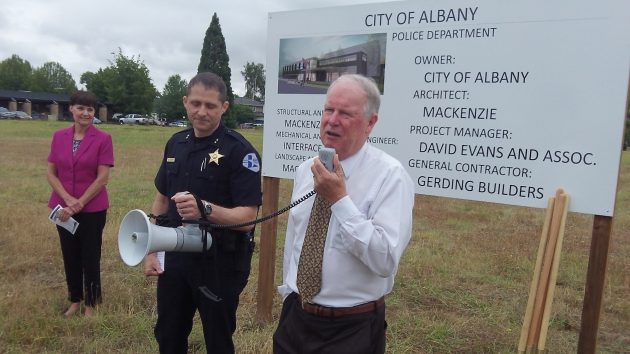