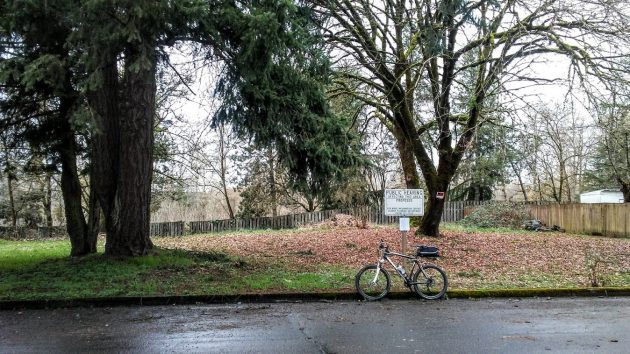 Pretty soon, this part of Linn Avenue will look completely different: Apartment houses instead of trees.

The Salem owners of a section of Albany riverfront now have city approval of their plan for 120 apartments on the 6.2-acre site.

Over the objections of much of the neighborhood, the Albany Planning Commission Monday approved the developers’ site plan and related permits for “The Banks,” a project of market-rate apartments arranged in eight three-story buildings.

The hearing lasted almost three hours. It was mostly a case of neighbors’ objections being overwhelmed by the weight of Oregon land-use law and the zoning as cited by the city staff and the engineers and the lawyer for the the developers, Salem-based Willamette River View Holdings.

Because of the terrible audio quality of the virtual meeting online, and because most of the members had not turned their computer cameras on, I didn’t get the vote breakdown. I counted seven members voting, and I think I heard one no and one abstention. So the approval was overwhelming.

Commission member Dala Rouse, who lives near the project and testified against it, recused herself.

I did hear two of the four new commission members, Sonja Neperud and Theodore Bunch, voting for the plan. Mayor Alex Johnson II appointed them last week to replace two members who had voted against it the last time it was up before the commission.

The gist of the applicants’ arguments was that the plan met all the criteria in the Albany development code, which the city planning staff also said it did, and that the city must use only clear and objective standards by which to judge it. Things like compatibility with the neighborhood didn’t count.

The site, most of it a former industrial site on the river, had been rezoned for apartments in 2003.

This was the third planning commission hearing on The Banks since 2019. The panel approved it once with 105 units but then last year rejected a change in layout and size to 120 units, which it now has approved.

Chances are that this will be the last time it comes up. The decision can be appealed to the Land Use Board of Appeals, but that’s unlikely because of the expense and slim prospect for success. (hh)