Planning board rejects ‘The Banks’ changes 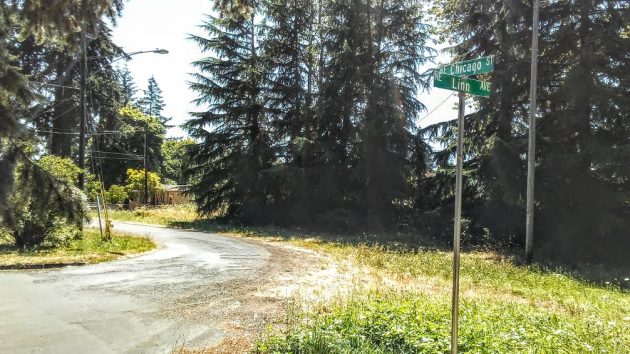 The quiet corner of Linn Avenue and Chicago Street, near where “The Banks” apartment project has been proposed. The planning commission Monday rejected an expansion of the plan.

Developers of “The Banks,” an apartment project they want to build on the Willamette River near Bowman Park, ran into a snag Monday when the Albany Planning Commission said no to changes in their plans.

After a remote, online public hearing that lasted three and a half hours and was plagued by technical glitches, four commission members voted to reject revisions in plans that were approved in 2019.

Those voting to deny were Diane Hunsaker, Therese Waterhous, Ann Ketter and commission chair Larry Tomlin. JoAnn Miller abstained. Two other members, who were online when the meeting started, apparently had dropped off when it ended.

Commission member Dala Rouse, who has lived near the project site for 53 years, recused herself because she had signed a petition against the development. She also argued against it during the hearing.

The most forceful testimony came from Mary Abraham, also a neighbor, who had organized the appeal to the planning commission after the city planning staff had approved the modified site plan.

The owners of the 6-acre site, Salem-based Willamette River View Holdings II, won commission approval last year of a site plan for 105 apartments in eight buildings plus a clubhouse, along with parking and related features.

Their new proposal called for 120 units and a new layout of the nine buildings. They also wanted to drop a proposed emergency access point on Alco Street and replace nine townhouses facing Linn Avenue with two 12-unit apartment blocks, plus the end of a third.

Neighbors objected that these changes amounted to more than a modification of the plan approved last year. They worried that people in the 24 apartments proposed for Linn Avenue would take up on-street parking, crowding out the residents on the south side of the one-block street.

Reasons cited for rejection of the changed plan were the increase of 15 units, the replacement of the nine townhouses with 24 apartments, and the loss of the proposed emergency exit on Alco Street.

Chances are this won’t be the last word on The Banks.

The applicants’ lawyer, Alan M. Sorem, suggested the city ran the risk of being fined — by whom he didn’t say — for using other than clear and objective standards if it rejected the amended plans.

Why not go ahead with the approved site plan? Because as Zach Pelz of AKS Engineering in Keizer told the commission, the original plan had proved cost-prohibitive.

The commission’s denial may be appealed to the Land Use Board of Appeals. But first, the commission has to ratify formal findings to back up its decision. That’s supposed to happen when the planning board meets next, on Sept. 28. (hh) 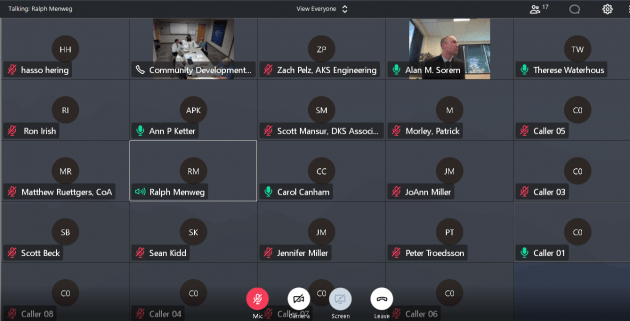 How the planning commission meeting looked on the GoToMeeting app.

Zach Pelz goes over proposed changes in the site plan for The Banks.

7 responses to “Planning board rejects ‘The Banks’ changes”