Plan is not what homeless need 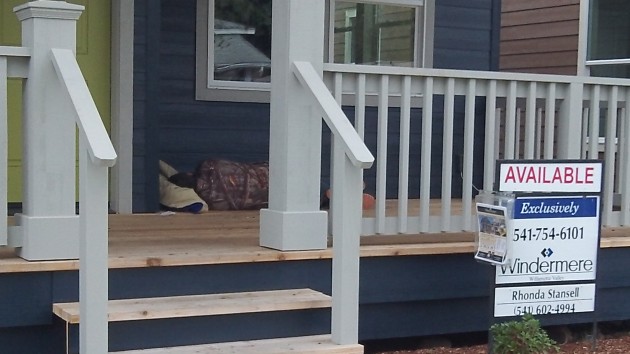 Naptime on the porch, photographed on Oct. 16.

For five years or so, cities and counties around this part of Oregon have had 10-year plans to end homelessness. The federal government has one too, adopted in 2010. What we have learned — again — is that making a plan does no good other than to give those making it something to do.

(We know this from other plans as well. Community development plans, for example, call for a nice distribution of services, a design that’s totally ignored in the real world. And Albany has a transportation system plan that calls for things that everyone knows will never get built.)

I don’t know whether the number of people living on the street in Albany has gone down since the city’s 10-year-plan was adopted. Just from looking around, I would say no. We may get an update on Wednesday, Nov. 4, when the “10th annual Albany Summit on Homelessness” unfolds from 9 till noon at City Hall.

Sure, as city officials point out, some individuals have managed to improve their lives once they got help getting a roof over the head. But then you keep seeing a guy sleeping on the porch of a new but still unsold house near the riverfront. And on a visit to the public library off 14th, you see an old woman shuffle across the parking lot with a cart full of possessions covered by a tarp. So the overall numbers don’t seem so important.

The federal plan (“Opening Doors”) is 74 pages long, the product of countless meetings across more than a dozen federal agencies, and calls itself “a roadmap for joint action” and a “framework for the allocation of resources and the alignment of programs.” That old lady with her load of personal junk needs no roadmap, no framework.

She needs a kind soul with courage to step up to her — instead of driving around her and avoiding her eyes — and ask: “Do you need any help? We’ve got an extra room where you could rest for a while, and your stuff would be safe.” If you did that, she might tell you to go to hell and leave her alone. But it would still be more satisfying than a plan. (hh)


2 responses to “Plan is not what homeless need”