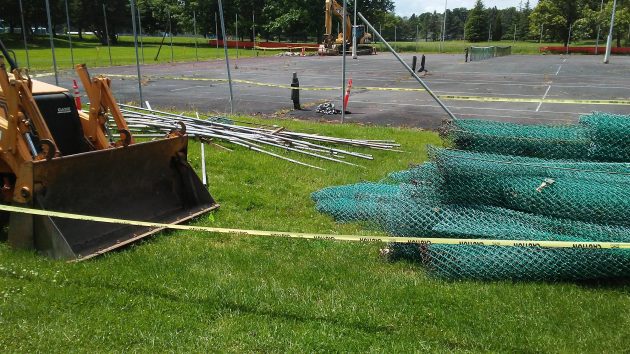 The former LBCC tennis courts as they looked Sunday. They’re being remodeled for pickleball,

If they haven’t heard already, Albany pickleball players may be glad to know that work has started on converting the tennis courts at Linn-Benton Community College for their sport.

A couple of readers let me know that the fences around the old courts had come down, and on my way out of town on Sunday I detoured through the campus to take a look. The result, you see in the image above.

North Santiam Paving of Stayton has the $329,888 contract to rebuild the long-neglected tennis courts to make them suitable for the newer sport of pickleball, which is played on smaller courts.

The Albany Parks Department is paying for the reconstruction under an agreement between the city of Albany and LBCC. The courts will be available to the public when they’re not in use for programs or classes. (The tennis courts were public as well, but they were not great to play on because of their deteriorated condition.)

For more on the background, go here or search for “pickleball” at hh-today.com.

The construction contract calls for the conversion to be complete by July 17. But there was a delay at the beginning because of the coronavirus crisis, so the completion may come later as well. (hh)