Pickleball at LBCC: Checking on progress 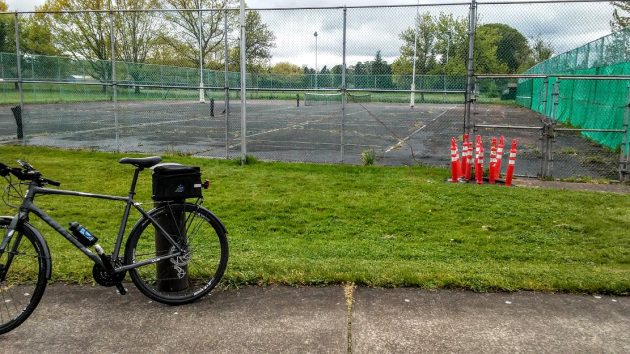 A batch of red traffic tubes was the only sign of the coming construction of pickleball courts at LBCC.

It was on March 11 that the Albany City Council awarded a construction contract for new pickleball courts at Linn-Benton Community College, and at least one player has been wondering about progress.

“If you happen to have time,” Mac Fishesman asked in an email, “I’d be interested to find out if the LBCC tennis court to pickleball court transformation is still on schedule. Feels even more important to me after being locked up, and it’s outdoors so should be pretty safe.”

Time? No problem for me during these Days of Corona.

North Santiam Paving of Stayton, which won the contract to turn the college’s tennis courts into pickleball courts with its low bid of $329,888, filed for a city building permit on April 15, but as of Sunday the permit was still listed as “pending” on the city’s website. No word on why it had not been routinely approved, or when it would be.

The contract says the project is to be completed by July 17. (This morning, April 27, Tom Valentino of the city emailed that the permit had been delayed because of the corona situation. “We are hoping to start the project this week.”)

On Friday I rode the bike down to the campus, which was pretty much abandoned because of the corona shutdown. I had hoped to see at least some demolition. But the tennis courts were still there, in the same sorry shape they’ve been for years. But there was a lock on the main gate, lest anybody sneak in.

Near the gate, the contractor had left some of those plastic tubes used to direct or warn traffic. (For some reason they seem to be called “looper tubes,” according to one online ad for these gizmos.)

A few hundred feet south of the tennis courts, I once again admired the huge mural showing four former LBCC athletes on the brick wall of the college’s gym. I couldn’t remember much about it, so I looked it up.

Dedicated in September 2016, it was the work of Rip Cronk, living in Philomath at the time. A quick online search will tell you about his long career as a muralist. Especially, look for a YouTube video showing his work in Venice Beach, where had had gone to refresh some of the murals he had done decades before.

The athletes on the LBCC wall don’t look like they need refreshing. They look as vibrantly alive as the day he painted them on the bricks. (hh) 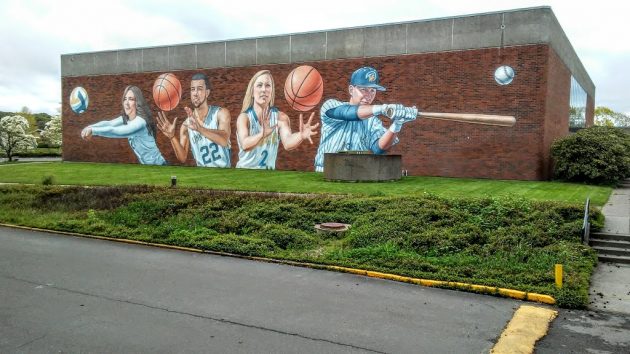 Rip Cronk’s athletes on the gym looked more alive than the rest of the LBCC campus last Friday.


4 responses to “Pickleball at LBCC: Checking on progress”