Pick up those plastic bags! 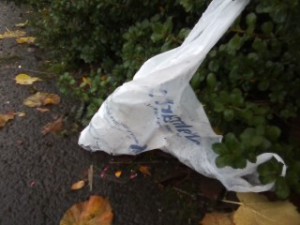 This bag was dangling on a roadside bush on Albany’s Bryant Way before it was recovered and disposed of in a trash can.

Hey, if you don’t want the next Oregon legislature to ban the use of plastic grocery bags, quit throwing them around the countryside. Far too often we see plastic bags dangling in the bushes or being blown into ditches. This provides a handy argument for those who want the bags banned.

The last legislature narrowly rejected a statewide bag ban. But the next one likely will not show as much restraint. Dominated by Portland legislators and Democrats from other urban centers, you can expect the 2013 Salem session to renew the push for a statewide ban.

Portland and a few other cities including Corvallis have already acted on that front. The ban deprives grocery shoppers of a choice that many of them now make. Some of us prefer the plastic bags — not all the time, but now and then — because they come in handy at home. They serve all kinds of uses for storage and disposal.

Beyond that, the ban is accompanied by a government requirement that grocers charge a nickel per paper bag. This is an annoyance more than a big expense, but why should this be the subject of a law? If grocers want to charge us for bags, let them do so on their own. We will see what happens then.

In the meantime, we have reason to resent all those plastic bags fluttering in the wind and rain. If we see one and can do so, let’s pick it up and throw it in the nearest trash. Each one left outdoors serves as a silent argument to go ahead with a statewide ban. (hh)