Photo speed tickets: Not in Albany (yet?) 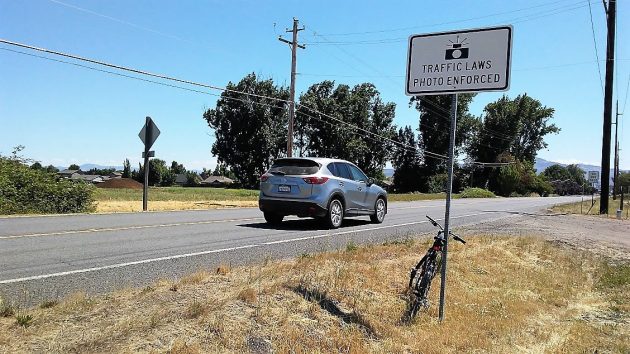 While I was biking around Medford the other day, this sign caught my eye now that Albany has begun experimenting with radar speed displays.

The Albany radar sign, near the railroad crossing on Second Avenue S.E, has nothing to do with enforcement. It’s intended to shame drivers to slow down, even though as reported here on June 23 the average speed there — 28 mph — is hardly excessive.

The Albany display just shows a vehicle’s speed. It takes no photos of speeding cars, and no tickets result. The same with similar displays on Spring Hill and Riverside.

In Medford, on the other hand, they’ve had photo speed enforcement for many years. Retired officers operate a couple of photo radar enforcement vans that can be deployed around town. Offenders, usually drivers who go at least 10 mph faster than allowed, are mailed tickets.

Since April, Medford also uses its red-light cameras at a couple of intersections for speed enforcement. The legislature authorized this in 2017. The idea was to discourage drivers from speeding up in order to avoid being photographed running a red light.

Albany has only one set of red-light cameras, at Queen and Geary. When the legislation on speed enforcement (HB 2409) was pending last year, the Albany police told me they had no plans to equip those cameras to check for speed as well.

So for now, unlike in Medford and a few other  towns in Oregon, the only speeding tickets Albany drivers have to worry about are those prompted by the reading on a radar gun pointed at them by an officer sitting by the side of the road.

But who knows, if speeding gets to be more of a problem than it evidently is on southeast Second, maybe Albany someday might take the next step and have to put up signs like the one above, on Medford’s Rossanley Drive. (hh)


2 responses to “Photo speed tickets: Not in Albany (yet?)”