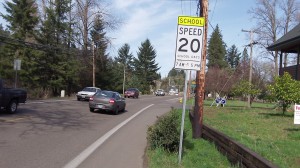 Why the school zone hours when no children are out and about?

Say it’s 10 in the morning and you’re driving through a school zone. You’re supposed to slow down to 20 miles an hour, but you ask yourself why. All the children are safely tucked in their classrooms, or maybe the gym. The point is that they’re not walking to or from school.

Okay, some of them may be cutting class, but if so they are not hanging around on the road within sight of the school, are they? In short, you can safely assume that no kid is going to run out in front of your car. So what’s with the 20 miles an hour?

The signs say 20 mph from 7 ot 5. But as I say, it’s 10 in the morning, and so you don’t take the signs literally. You slow down, just in case, but not all the way down to crawling speed. Some legislators now want to make it easier for you to be caught and fined. Rep. Chris Gorsek, a Democrat from Troutdale, and several co-sponsors have just introduced House Bill 3438. It would allow any city to install photo radar in school zones, at the city’s own expense, and operate it from 7 to 5.

Cities are always crying for more revenue, and photo radar in school zones would provide some. So they might go for it. The likely excuse for the bill: Children’s safety. But children are not around during most of the school zone hours, so how do they benefit? Instead, lawmakers ought to do drivers a favor and revert to the old school zone law, before it was changed several years ago: 20 mph “when children are present.” That made more sense and held up traffic less. (hh)