Phoning while driving can have a stiff price 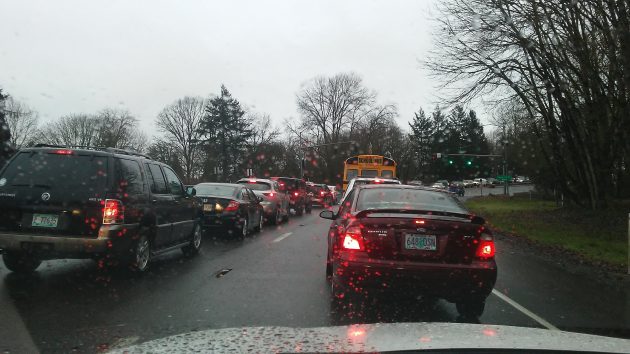 Driving takes concentration, and you would not want to be distracted in traffic.

This is supposed to be Distracted Driving Awareness Month, so it pays to be extra careful not to use our hand-held phones while driving, and not just to avoid big fines.

In recent years Oregon has tightened its laws on this subject and increased the potential penalties, as ODOT reminds us via an online fact sheet. The basic law is that it’s illegal to drive while holding or using a cell phone, tablet, GPS device, laptop or similar device.

If you get caught doing so anyway but don’t cause a crash, it’s a Class B violation with a fine up to $1,000. On your second offense, or if your phone use contributes to a crash, the offense rises to a Class A violation with a potential $2,000 fine.

(On the first offense, without causing a cash, the court may suspend the fine if the driver attends and pays for an approved “distracted driving avoidance course.” Chances are the fee for the course is bigger than the potential fine.)

If you haven’t learned anything the first two times, the third offense in 10 years becomes a crime, a Class B misdemeanor. The penalty can be up to six months in jail and a fine of $2,500.

Despite the threat of dire consequences, if you look around, you still see drivers holding phones and apparently talking to someone. That’s why, as hokey as it sounds, there’s a point to this so-called “awareness month.” Thinking even briefly of the destructive consequences of causing an accident while using the phone might just change how we act behind the wheel.

At last week’s city council meeting, Albany Mayor Sharon Konopa issued a proclamation against distracted driving. She related this to the traumatic crash last year, when she said a distracted driver ran a stop sign and slammed into the vehicle containing her and her husband, putting her in the hospital and leaving her with permanent disabilities..

Her remarks — you can watch and listen here, about 4 minutes and 20 seconds into the meeting — reminded me to check whatever happened to the other driver. The answer is nothing much.

Linn County Undersheriff Paul Timm told me Monday the sheriff’s office investigated the crash and forwarded the report to the district attorney’s office, but the DA declined to prosecute.  The driver denied being on the phone, and there was no proof to the contrary. Also, Timm said, there was no citation.

Regardless of the facts of this case, ODOT says in Oregon we have a crash involving a distracted driver every two and a half hours. So, if you don’t want to be the cause of potentially serious trouble and grief, wait to make that call until you’re out of the car. (hh)


4 responses to “Phoning while driving can have a stiff price”