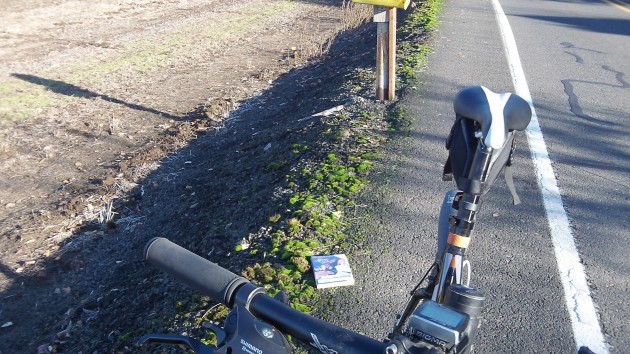 A phone book waits to be picked up near somebody’s mailbox on Bryant Way earlier this week.

You’d think there was a better way to deliver phone books. But then, why all those additional phone books in the first place?

On one of my bike routes, I see phone books on the ground next to mailboxes every few months. Or so it seems; I haven’t actually kept a log of when I saw them last before there was another batch this week.

I assume the phone book publishers can’t afford or don’t want to pay whatever it would cost to put their directories in the mail. So the delivery persons have to leave them on the ground, hoping somebody will pick them up and put them to use.

Across the country over the last 20 years or so, phone books proliferated to the point where people complained. The result was a system allowing you to opt out. All you have to do is call and get on the list.

At least two cities, San Francisco and Seattle, passed laws against distributing unwanted phone directories. The Seattle law was challenged on constitutional grounds, but a federal district court upheld it.

As for the distribution to individual addresses, I understand that only the Postal Service is allowed to put stuff in our mailboxes. That’s why the books end up in the dirt by the mailbox or, best case, on the steps by the front door.

In the digital age, and since the decline of land lines in favor of mobile phones without listed numbers, phone books have been shrinking in heft. You can’t use them any more as a booster seat for the little ones. For that you need encyclopedias. (What’s that, you ask? They’re big fat books you can pile in a stack that won’t collapse.)

There used to be one phone book, and that was more than useful. All people with phones were listed unless they paid something to be left out. In seconds you could look up people’s names and addresses, and their numbers too of course, without having to power up an expensive phone, tablet or other device and possibly having to pay a fee. Saved all kinds of time and money.

But that’s history, no matter how many companies still publish their own phone books because they can sell ads in them.

Progress in regard to phone books? Doesn’t look like it from where I sit. (hh)