Looking west from a section of Essex Street. That big tree is one of several proposed to be cut.

The Albany Planning Division has received a tentative plat for a 148-lot subdivision that would cover most of 47.5 acres of open field in North Albany and require the felling of 22 trees including three big old Oregon white oaks.

Given the proposed layout of streets and houses, the oaks can’t be saved because too much of the canopies and root zones would have to be removed, which would be detrimental to their health. So the developer’s arborist recommended their removal, David Martineau of the Planning Division told me.

Albany’s review criteria for tree removal are not strict enough to prevent those specimens to be felled. Still, a different arrangement of the home sites could presumably allow these large oaks to remain and become points of interest and beauty in the future neighborhood.

As proposed, the developer, Hayden Homes, plans to set aside about 12 acres of “significant wetlands” along with three other parts of the property as natural areas.

The property is north of Dover Avenue and west of Crocker Lane. Property owners within 1,000 feet of the site were being notified of a public hearing on the application before the Albany Planning Commission. It will be held at 5:15 p.m. March 5 in the council chambers at City Hall.

More information including a map of the development is available on the Planning Division’s website here. As of Tuesday night it was the top item on the list.

The developer is calling this subdivision “Pheasant Run.” Before Albany annexed North Albany in 1991 and launched the subdivision boom, pheasants were common in the area, occasionally launching themselves across Scenic Drive just ahead of my oncoming truck. I don’t know whether any remain to justify this development’s name. (hh) 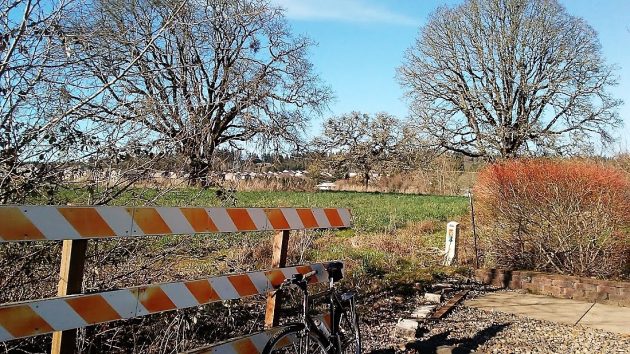 Looking northwest across the land proposed to become the 148-lot Pheasant Run subdivision. In the distance, Benton Woods.