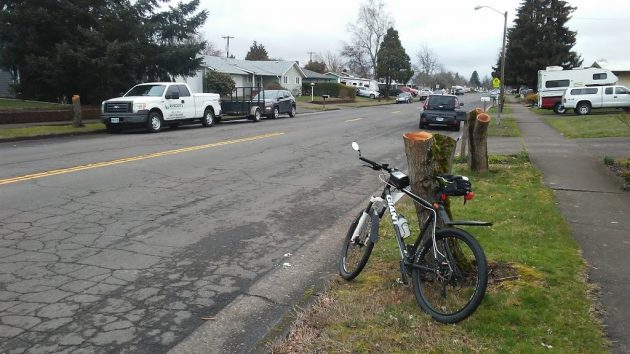 Trees along this portion of Southeast Hill Street have been lopped off at chest height. The street will get rebuilt this year.

More than half a mile of Hill Street in southeast Albany will be rebuilt this year, and the cost is substantially less than city engineers had feared.

On Feb. 13 the city council awarded a contract to Pacific Excavation Inc. of Eugene, whose bid of $3,054,344 was the lowest of seven. The city’s pre-bid estimate of the cost had been $4.4 million.

Hill Street south of Queen Avenue had been crumbling because of its age and the amount of traffic on the largely residential street. The stretch from Queen to 24th Avenue was reconstructed last year. Now it’s the turn of the 10 blocks from 24th all the way south to 34th.

The engineer on the project is Chris Cerklewski. His memo to the council, recommending the contract award to the low bidder, said the project calls for 2,950 feet of full street reconstruction complete with curbs, sidewalks, storm drains, street lights, and landscaping. (He didn’t mention bike lanes, but presumably they will be there just as they are on the completed section of Hill.)

Also included is the replacement of an 8-inch water main along the whole length of the project with a 24-inch iron pipe. The larger main, the memo said, will provide better service by moving “large quantities of water from the Albany-Millersburg Water Treatment Plant to all of South Albany.” Also, upsizing the line now will avoid having to cut into the new pavement later when increasing its capacity would otherwise become necessary.

As part of the city contract, the contractor will install three mailbox clusters. Other residents will get 63 new individual mailboxes at a price listed on the bid sheet of $350 each. Consider it their reward for living through having their street torn up. (hh)