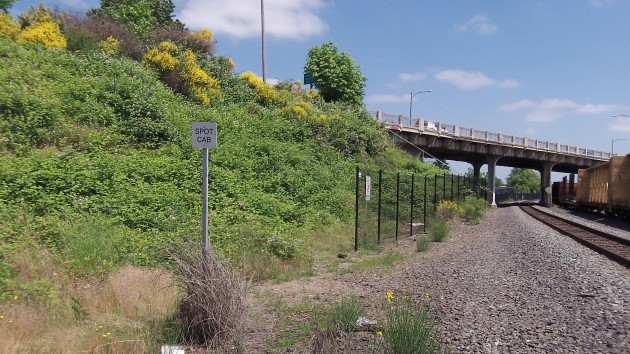 Nothing’s going go yet where the path is to be built.

If you’re anxiously waiting for that new bike and walking path under the Pacific Boulevard overpass — and even if you’re not — you’re going to have to wait a while longer. Construction was to have started in May. But nothing’s going on at the site. The reason: The project apparently needs a permit from the Union Pacific Railroad, but no permit was obtained. 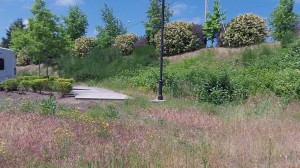 “Where the sidewalks ends” now but, one hopes, not for long.

The path is the last uncompleted part of the decade-long project to renovate the train depot as the transportation hub known as Albany Station. It will go for 600 feet from the station eastward, squeezing between the tracks and the embankment holding up the overpass, until it connects with Swanson Park on the other side.

In April I reported that the Oregon Department of Transportation had awarded a contract to build the concrete path to HP Civil Inc. which submitted the lowest of 14 bids at $383,692. The contract called for the work to be finished in September, and the contractor hoped to begin in May.

This week I stopped by the station and found the would-be construction site undisturbed. I asked Rick Little, the go-to ODOT information officer for this region, about the apparent change of plans.

He looked into it and this morning sent this report: “After pursuing your inquiry, I’ve learned that a needed permit from UPRR was not obtained and the RR says it can take as long as eight months to issue the permit. Therefore, the contractor has agreed to a one year, no-cost time extension of work. The City of Albany, the consultant on the project, and ODOT are working the permit issue and hope it can be secured more quickly than eight months. We’re still hopeful that construction can begin this year. However, the RR seems to hold all the cards on this one.”

You’d think that if you’re planning to build something that close to the main north-south rail link in Western Oregon, you’d make sure this angle of the project was covered first. Well, better late than never. Let’s hope this wrinkle gets ironed out so the path can be built and the station project can finally be called complete. (hh)