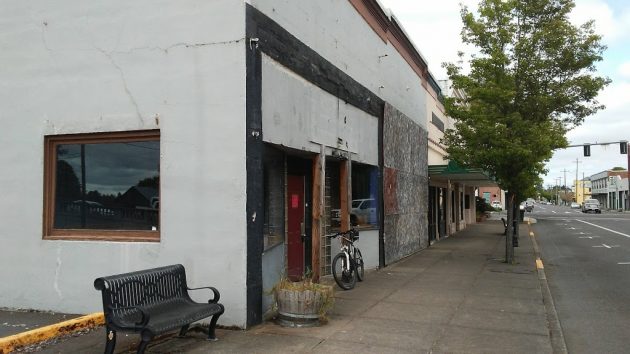 A view of the former tavern at 129 W. First Ave. this April.

In January 2018 the city of Albany approved renovating the facade of what counts as a historic building at 129 First Ave N.W. Now the new owner has applied for a building permit to get the renovation done.

I last checked on this address this April, when I noticed that Albany Code Compliance Officer Kris Schendel had posted it as a derelict structure and given the owner a deadline to get it fixed.

Though you wouldn’t know it from looking at it now, the building was designed by famed Albany architect Charles Burggraf and constructed in 1919. In recent decades it housed the Westerner and First Round taverns. Then it was the Espolon restaurant when, during an attempted remodeling in September 2016, the front started to collapse and the building was boarded up.

In January 2018, the Albany Landmarks Advisory Commission (the “Advisory” has since been dropped from the name) approved exterior alterations designed by Varitone Architecture of Albany.  But the owner at the time, then living in Las Vegas, eventually sold the property to the Salem-based Jesus Revival Association, which runs a church in Albany.

On Monday, according to the city’s online files, architect Christina Larson applied for a building permit on behalf of the owner. It’s to rebuild the facade according to the plans her firm designed for the previous owner in 2017 and Landmarks approved the following January.

Big Valley Builders Inc., based in Brownsville, is listed on the permit application as the contractor.

The Jesus Revival Association previously applied for an exemption from property taxes for this property, but the Linn County assessor turned them down because of a lack of religious use. So if and when the remodeling is done and allows for the structure to be used again, downtown Albany may end up with another storefront church. (hh)

This was the design the Landmarks Commission approved in January 2018.