‘Pending’? Not any more; depot deal is done

At the corner of Fifth and Lyon on Tuesday evening, May 31.

The “sale pending” sign was out of date on Tuesday night, but not by much. The sale of the historic Oregon Electric Railway depot in downtown Albany was completed earlier in the day.

The sale had been in the works since Feb. 1, when Matt and Janel Bennett announced they were under contract to buy the property from Hamid Siddiqui and his brother Tariq “Tim” Siddiqui.

On Tuesday afternoon, Matt Bennett called to say it was now a done deal. The closing papers on the sale had just been signed. The purchase price was $900,000.

The Bennetts own Sybaris Bistro, the restaurant they’ve operated since 2001 in rented space at Washington Street and First Avenue. They want to restore the historic OER depot, built in 1912, and move their restaurant there.

Next, they’ll be working with architect Bill Ryals and their contractor, Pyburn and Sons, to go into the details of what needs to be done and “nail down the cost,” in Matt’s words.

The building is important in Albany’s and Oregon’s history. Its completion 110 years ago represented a milestone in the Oregon Electric’s drive to open a line from Portland to Eugene.

The structure remains pretty much unchanged from a century ago. And to help with the cost of refurbishing it, as reported earlier, the Bennetts and the Albany Downtown Association have been approved for a $200,000 state grant. (hh) 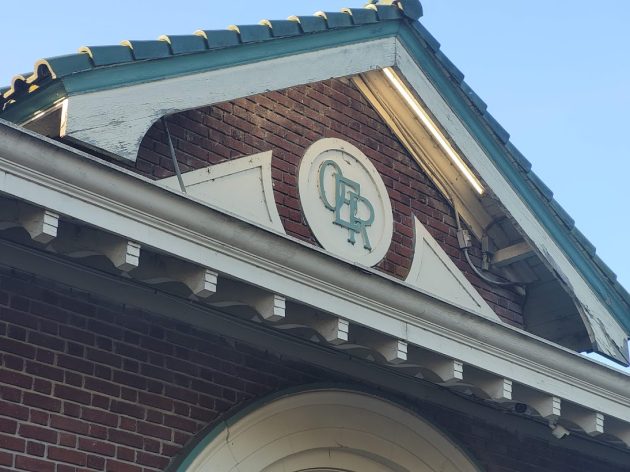 Even though the building has been empty for more than a year, the fluorescent tubes in the gable never went out.

2 responses to “‘Pending’? Not any more; depot deal is done”