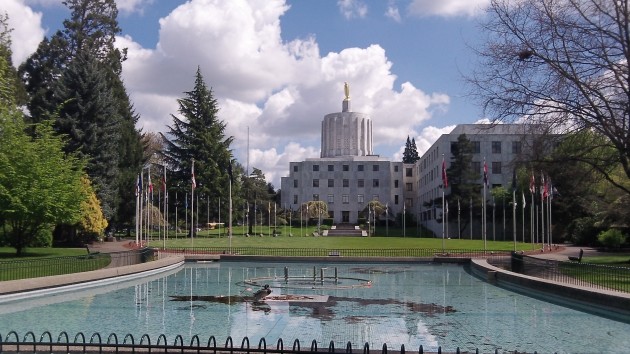 The Capitol on a spring day: Wouldn’t more daylight after work be nice?

Of all the bills introduced in the 2015 Oregon Legislature, my favorite so far is Senate Bill 99. It would take Oregon out of daylight saving time starting in 2021 if the voters approve in the 2016 general election.

Sen. Kim Thatcher, R-Keizer, introduced the bill at the request of a constituent named Gene McIntyre. Bills requested by individual voters typically get nowhere, and I have no idea whether this one will be an exception. But if it does get traction. amendments would help. Why not do the opposite, that is, keep daylight saving time in effect year-round? The benefits would be greater, in terms of after-work activities while the sun is still up.

SB 99 stands out among the pending bills because it tries to fix an actual problem, the disruption in people’s lives caused by the needless time change twice a year. That’s what makes the bill unusual. But it is not the only one among the first 99 Senate bills that is worth noting.

For example, two measures sponsored by Sen. Rod Monroe, D-Portland, would allow local government to impose taxes on alcohol and tobacco. Think of all the local budget debates that this would entail.

Another proposal by Monroe would authorize sobriety checkpoints, in which police stop all drivers to see if any had something to drink. It would be annoying to be stopped, but not nearly as annoying as being killed by somebody driving drunk.

Senate Bill 16 would allow juries to be informed of minimum required sentences before they reach a verdict, which might prevent some unnecessarily severe sentences.

And then there is SB 74, which would allow voters to send in their ballots without having to spend money on a stamp. Hard to see how that is necessary, considering how many ballot drop boxes there are. (hh)