Pedaling the rails: Can’t do it here – Hasso Hering

Pedaling the rails: Can’t do it here 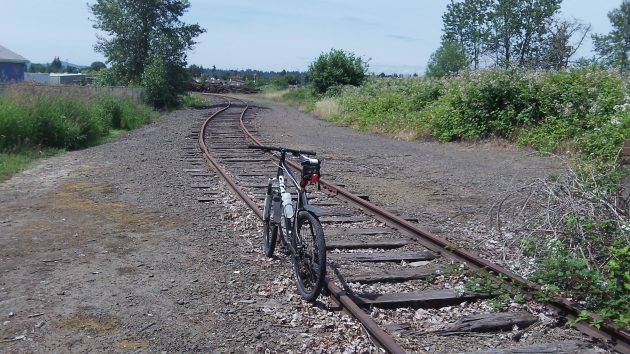 This short spur leads from the Albany rail yard to an unused loading dock near Hill Street.

Ever wonder about finding new uses for railroad tracks that are no longer needed? Not short little spurs in industrial zones like the one in the photo, but longer ones on scenic routes?

A couple of months ago I came across reports of a new venture in Tillamook on the north Oregon coast. The name is Oregon Coast Railriders. During the summer it affords people the opportunity to pedal four-wheeled, two-seat carts along an inactive segment of the Port of Tillamook Bay Railroad. The trip is from Bay City to Tillamook. For $20 per person 12 and older, you can make the two-hour, 11-mile round trip. 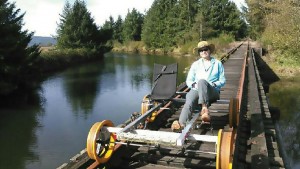 This shot is from the Oregon Coast Railriders website.

The people running the business have a similar program on the historic Joseph Branch Railway in the Wallowa Valley in eastern Oregon. Riders there can enjoy fantastic views of wildlife and nature in general, just as they can on the ride on the coast. They also get a workout from all that pedaling. Apparently it’s not too strenuous, though. In the publicity photos available online, the pedal-powered vehicles look light enough to be easily propelled. And the track is almost perfectly level, with no grade greater than 1 percent.

Benton County might have been able to help set up something similar when, in 2013, it paid $486,000 for portions of the old Southern Pacific’s abandoned Bailey Branch from Corvallis south to Monroe and from Alpine Junction into the hills to Dawson.  But the county bought only the land. The railroad, the Union Pacific by then, had the rails and ties taken up for scrap.

So that chance —  for something like “Willamette Valley Railriders” — is gone. Too bad, especially because the little town of Monroe is always crying for some kind of economic boost. A seasonal business catering to rail fans and nature lovers might not be much, but it’s something.

In the valley, as far as I know, we don’t have any publicly owned abandoned rail lines. So if you want the chance for a human-powered ride on a scenic stretch of rail, you have to go a long way — to the north coast, or to the other side of the state. (hh)

4 responses to “Pedaling the rails: Can’t do it here”