Here’s a first for the Albany City Council, at least in living memory: Unwilling to take a second long lecture from a man denied a permit to hold a marijuana festival in a city park, the mayor called a recess and the council walked out.

It happened during an otherwise routine city council session Wednesday night. Under an agenda item called “business from the public,” Shane Lemco, of rural North Albany, talked to the council while wielding a video camera. As he did two weeks ago, he tried to convince the council that one or more Supreme Court precedents required the council to give him a hearing after the parks director denied his request for reserving Monteith Riverpark for an event he planned to organize in July.

On April 12, also under “business from the public,” he had heatedly lectured the council for 20 minutes in what was supposed to be his appeal of the parks denial. He cited court cases and precedents on people’s rights to be heard but never got around to arguing why his reservation should have been approved. And the council finally voted 4-0 to uphold the denial without hearing anything about why the police department had recommended it.

On Wednesday, Mayor Sharon Konopa told him not to go over the same ground again because the council had made its decision and could not reopen the issue unless requested by any of the four councilors who voted on the 12th. None of them moved to reconsider.

My shaky video here covers the last few seconds of last night’s Lemco appearance at the podium and the council’s walkout. Lemco, as far as I could tell, let the council know his appeal was not over and would be taken to a higher level. I took that to mean a court. (hh) 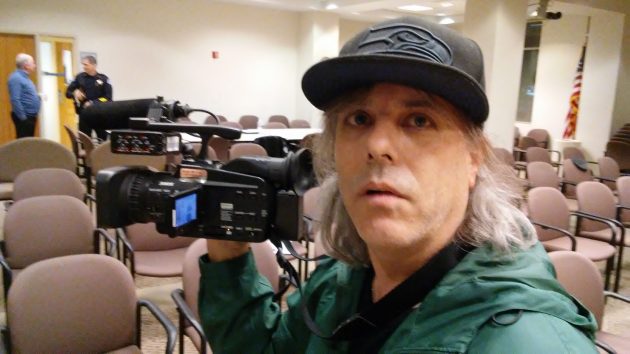 Shane Lemco with his video camera after addressing the council on Wednesday night.