Patience: Getting around to landscaping

Written May 27th, 2015 by Hasso Hering
Comments: no responses. 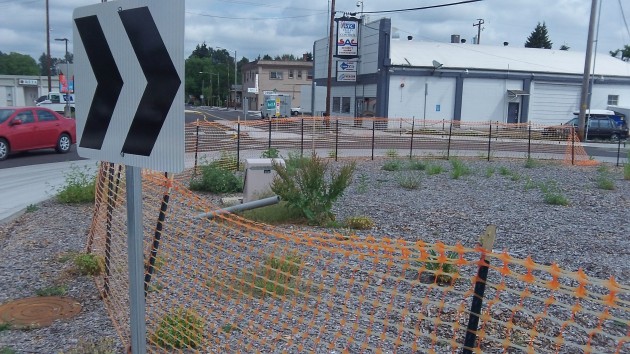 The inside of the Main Street traffic circle on Tuesday,

Weeds are sprouting, as weeds will, in the center island of Albany’s Main Street roundabout, where a planned landscaping treatment is taking longer than expected. But let’s be patient; it should be done this summer.

It was in February that the advisory board of the downtown urban renewal district, CARA, decided not to spend any money on elaborate decorations for the roundabout island, a treatment  that would have cost an estimated $130,000. Instead, it was decided that the island would receive much less expensive, standard landscaping treatment. And it sounded as though that it would be done this spring along with other plantings in the reconstruction area at Main, Salem and Third avenues and Santiam Road.

When I noticed what the island looked like Tuesday, with the weeds and the hole in the plastic construction fence, I asked Jeff  Blaine at City Hall what the story was. He’s the interim Public Works Engineering and Community Development director, and he says that yes, the plan still is to put in landscaping similar to the traffic circles on North Albany and Knox Butte roads:

“The project engineer will put the landscaping out to bid on June 2 and will open bids on the 16th,” he reports. “The work will need to be completed by mid-September.” In the meantime he would see about the weeds..

The roundabout itself, completed in September 2014, has demonstrated its usefulness by solving the traffic congestion on that part of Main Street. Nearby stormwater swales have been planted, and now we can expect that the island itself will complete the picture by this fall. (hh) 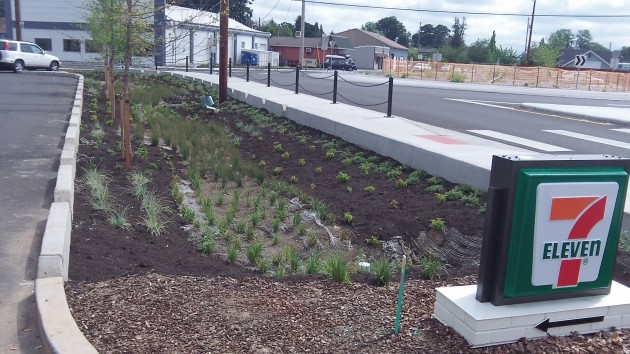 Swales like this in the Man Street project will collect runoff — when and if the rains resume.