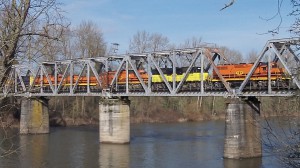 You won’t be surprised to learn that under federal guidance, Oregon continues to plod along slowly in trying to find the best way to enhance passenger rail transportation up and down the Willamette Valley.

The effort began 2011 with federal grants and the hiring of consultants to conduct an environmental assessment of various routes that enhanced train service might take. First though, criteria had to be developed against which the various alternatives could be judged. Now you and I sitting around a table over a beer could develop the criteria in half an hour, then spend another hour settling on the routes. But government works at a more leisurely pace.

On the last day of January, meeting in Salem, the governor’s rail passenger leadership council decided that several possible routes would get additional evaluations. This will take months, and the leadership group won’t get the next set of recommendations till some time this summer.

Albany Mayor Sharon Konopa, a member of the group, reports that the routes now being evaluated include one from Eugene to Corvallis on the west side of the valley, continuing from Corvallis to Albany and then north. That would probably entail bypassing Albany Station, because stopping there and turning trains around — or at least putting the engine on the other end — would take too long. (Also, can you imagine fast passenger trains rumbling across the 1926 Willamette River railroad bridge at Albany?) But since the west side routing thorugh Corvallis would cost more travel time, why even consider it when the goal is faster service between Portland and Eugene?

The federal process of making decisions — followed here because federal grants are involved and the final decision will come from the Federal Railroad Administration — requires that all possible alternatives be considered. That’s why it takes so long, and why the obvious solution — double-tracking the existing main line — has to compete with all the rest. (hh)