Parking outside the lines: What’s too far? – Hasso Hering

Parking outside the lines: What’s too far? 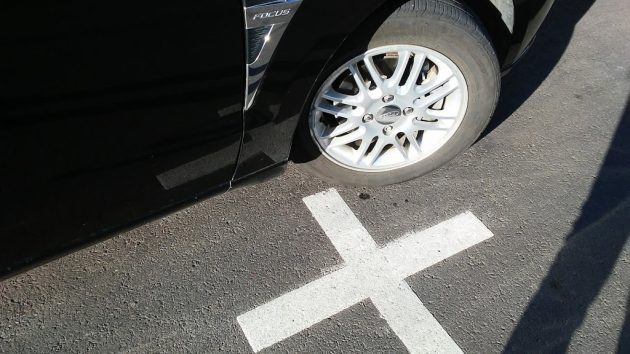 It took me a while on Saturday to find, on Second Avenue, this illustration for the story below.

If you park your car on downtown Albany streets on weekdays, it goes without saying that it’s best to park inside the pavement markings and not risk a ticket by straying outside. But what about being just a little outside? And how little is too much?

A reader’s email prompted me to try to find out. In part, here’s what it said:

“I have heard stories from friends about parking violation citations. In most instances the violations have been for either front or rear being minutely past the white parking space markers. As you may be aware, sometimes that can be influenced by cars already parked. It seems to me that there is a pretty aggressive interpretation of ‘over the line.’ Most recently a husband and wife, driving separate cars, were both cited on the same day for (this) violation. And how much is the fine, or is it a warnable occurrence?”

Under authority of the city council, downtown parking regulations are enforced by the Albany Downtown Association with its ParkWise Program. The association’s executive director, Lise Grato, referred me to the municipal code.

In places were pavement markings have been put down, the code says no person shall park a vehicle “other than … within a single marked space, unless the size or shape of the vehicle makes compliance impossible.” For downtown streets with time limitations on parking, the code says the same thing but allows no exception for over-size rigs.

So, is there a tolerance for slightly outside the space? Grato told me by email: “A car is considered parked in two spaces if the axle is on or across the T tick mark on the street that defines a parking space.”

That’s not in the code, but it’s nice and clear. So what about people getting tickets for being over the mark by less? The city code gives the Downtown Association authority to have a Board of Parking Reconciliation that “is authorized to compromise and settle parking violations with the person charged with a violation upon such terms as the Board deems just.”

In short, if you feel wrongly ticketed, contact the association and hope that “reconciliation” will take place.

If it doesn’t — to answer my emailer’s last question — downtown parking tickets are $35, according to the city code. If they’re not paid within 10 days, the price goes up to $40. And if unpaid after 30 days following the citation, it’s $70.

The money pays for the ParkWise program, which Lise Grato told me has an annual revenue budget of $75,000. The program pays for payroll expenses — 100 percent of the single ParkWise officer, 50 percent of the association’s office manager and one-third of the executive director. It also covers the monthly fee for a parking enforcement software program called “Clancy,” plus a cell phone with a ticketing app, envelopes and other supplies.

Fascinating though these details may be, none of them are as important to remember as it is to park with your axles inside the marks. (hh)

14 responses to “Parking outside the lines: What’s too far?”