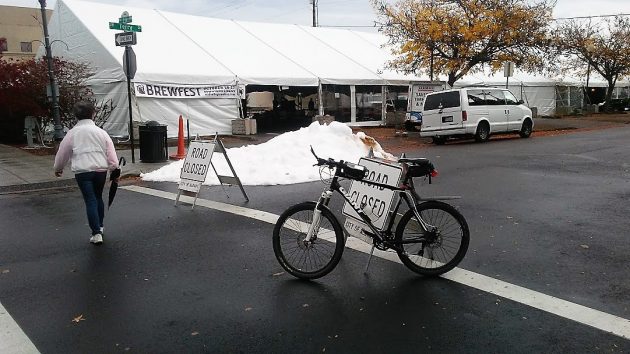 I rode past and stopped as they were setting up for the “Brewfest” Friday afternoon. (Is that a pile of snow?)

There was some grumbling on Facebook that an entire downtown Albany parking lot and adjacent street were blocked for a special event. But the closure, planned since February, had the support of the Albany Downtown Association.

The “Brewfest” started Friday night and continues Saturday (today). It’s a bash featuring music, food, and beer as the name implies. The whole thing is a benefit for the Albany Boys and Girls Club, whose operations director Maya Perez said in the application for a city permit that about 2,000 people were expected to take part.

The Two Rivers Market parking lot and Ferry Street between Second and Third were blocked for the event.

The Boys and Girls Club applied for a city permit for the closure and amplified outdoor music in February. The city staff approved it in March. The director of the Downtown Association, Lise Grato, had written an email supporting the siting. She wrote she had spoken to key merchants and restaurants adjacent to the parking lot.

This annual beer festival and benefit used to be held on Water Avenue along the riverfront. No word on why the more central location was chosen this time.

Tents went up in the parking lot Thursday and will be gone by mid-afternoon Sunday. (I noticed the closed parking lot on my way to the Taqueria Alonzo on Thursday night. No worries, though, as I easily found parking on Third.)  (hh)

13 responses to “Parking lot closed for music and beer”