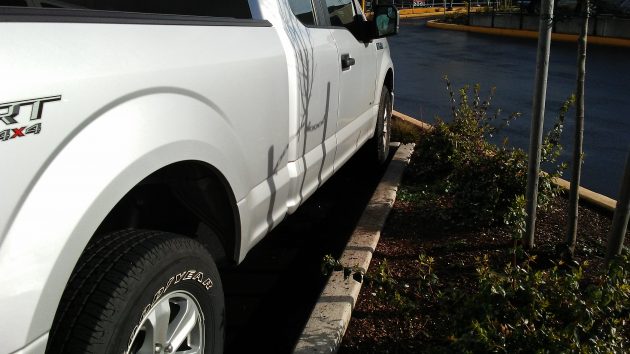 Bark mulch, trees and bushes may be required by city standards, but where is one to step?

What were they thinking? It’s no big deal, but that’s what I was wondering when I looked at this bit of landscaping in the Albany Fred Meyer parking lot on Wednesday afternoon.

The company reconfigured its vast parking areas a few months ago. A few small islands of landscaping appeared as part of the project. (Among other changes, one entrance to the lot from Santiam Boulevard vanished, making it less convenient to get to the store.)

Landscaping is a good idea from the standpoint of looks, and for catching runoff, and Albany’s Development Code requires it. But maybe somebody should consider how practical some of these elements are for people getting in and out of cars.

The code has minimum standards for parking lots. One is that landscaping cover at least 5 percent of the lot, and that areas of more than 100 spaces be divided into clusters separated by landscape strips. In addition there must be bays of no more than 12 spaces, and at each end of the bay, there must be a curbed planter at least 5 feet wide. The planters must have trees, decorative ground cover and shrubs.

All fine and good. But what good is it to have a planter next to a space if you park there and somebody wants to get in or out of the car? Step on the plantings? Trample the shrubs?

And by the way, considering the size of many vehicles these days, especially pickups, maybe they could make the spaces a little wider. (hh) 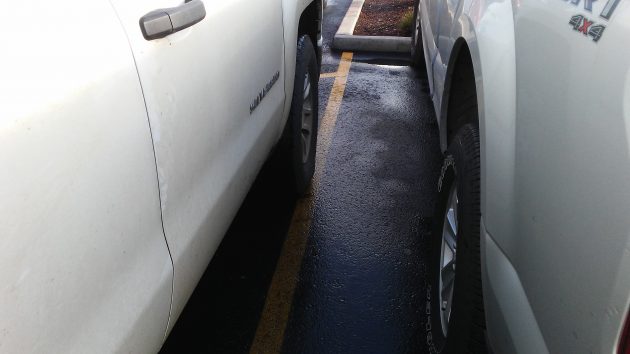 Maybe wider spaces would have helped the guy on the left.