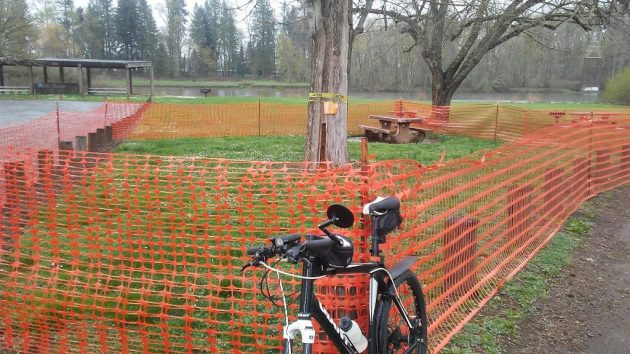 This tree in lower Bryant Park is destined to come down, but not just yet.

With orange plastic netting, the Albany Parks Department is trying to keep people away from a dying tree in lower Bryant Park lest they get conked out by falling branches. Why not just cut the tree down? Because birds could be nesting there.

Because of heavy rain and the threat of the rivers coming up, the city closed the lower park this morning. But on Thursday the rain was still light when the bike took me through the park and the fencing caught my eye.

Attached to the tree’s trunk, a sign explains the situation, assuming your eyesight is good enough to read it from outside the fence. It’s a “hazard tree” and you are asked to stay away from it for your safety. It won’t be cut down until after Aug.1, when birds are presumed to be through using it for their nests.

Rick Barnett, who’s in charge of park maintenance and also serves as the city’s forester, gave me details. The tree is an Oregon ash, and he guesses it’s about 50 years old.

“It has been somewhat scraggly for at least a few years now,” Barnett told me by email. “We left it because it appeared to be a nesting tree for a number of birds. Lately a piece of the outer bark down low came off, and it became apparent that the tree needs to come out. Assuming there are probably already birds in it, we are waiting until after nesting season to take it out.”

Speaking of trees, Barnett had other news. Using a bucket truck, park employees were about to assess the condition of some big old trees on Broadalbin Street downtown, south of the courthouse and near the home of Councilman Dick Olsen.

“The idea is to look at the trees’ current health as a baseline, and then yearly reassess.” Barnett said. “Eventually they will all need to come out. Because they are so prized by the neighbors, we want to be really fact-based and get as many years out of them as we can.”

“Sometime in May,” he added, “we are going to have a neighborhood meeting and discuss our findings and plans with the neighborhood.”

All this is a reminder not to take our trees for granted. Albany has just been redesignated as a “Tree City USA,” a status it’s had for a generation. Oregon Arbor Week is coming up, and you can read more about that occasion in the city’s newsletter here. (hh) 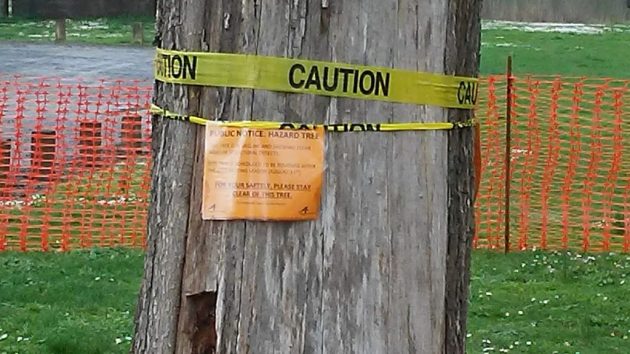 A big chunk of bark has come off the dying Oregon ash in Bryant Park.

7 responses to “Park tree’s life extended — for the birds”