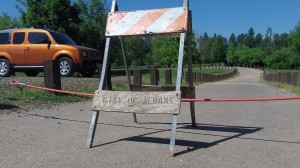 My bike route takes me through Albany’s Bryant Park almost every day, and I’ve been wondering about something: Why has the lower loop of the park drive near the Willamette River been closed to cars?

During the routine wintertime flooding, the entire park road was closed. But the upper loop has been open since some time in March or April. The lower loop remained closed even on Friday, 10 days into May, even through there’s no physical reason. The path is dry and clear or debris. (I know this  because a guy on a bike can ride it by evading the barriers at each end.)

I wondered about this little mystery until finally I did the obvious thing and asked the parks department. Craig Carnagey, the city parks superintendent, replied by email on Friday morning: “Our plan has been to open the gates next week. We’ve heard from a lot of walkers and birders that they really enjoy the area more without vehicles, so we decided to keep it closed a little longer.”

So now we know. The mention of walkers, though, reminds me: The speed bumps on the park road make life a little harder for people who get around on motorized chairs. I once saw a guy nearly capsize getting over one of those humps. One solution — for a town working hard on ADA compliance — is to cut gaps in the center of the bumps wide enough to let wheelchairs through. It would be an unintended side benefit that cyclists then could use the gaps as well. (hh)