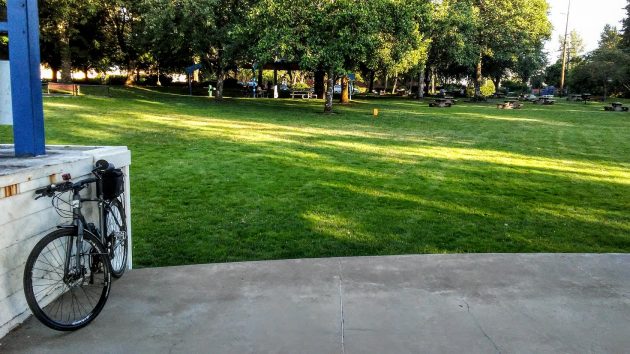 Nobody was at Monteith Riverpark when my bike took the summer concert stage on June 22.

As you have probably heard, the end of Covid restrictions on public gatherings has caused Albany Parks and Recreation to drop its plan to restrict attendance at this summer’s concerts in Monteith Riverpark and charge $5 to get in.

Parks and Recreation Director Kim Lyddane made the announcement Wednesday.

The original plan — online-only sales of a limited number of tickets at $5 per person, along with other routines — was intended to enable the city to hold concerts at all in face of state-mandated restrictions, and also to recoup some of the added costs made necessary by Covid-19.

Now that the restrictions are off, Lyddane quickly revised most of the plan.

The concert venue in Monteith Riverpark will still be surrounded by a temporary fence, with three gates including the main one on Washington Street.

But instead of requiring tickets, the city will ask people for a donation as they go in. The “suggested” amount is one dollar a person, but if people want to donate more, no one’s going to stop them. The money is intended to help defray the costs of putting on these events.

More information about all this, including expenses and revenue, is covered on the parks department’s website here. Lyddane suggests people go there to find out all anybody wants to know.

Four concerts are scheduled in the River Rhythms series, on Thursday nights from July 22 through Aug. 12.

The Summer Sounds series, on Monday nights, has three concerts, on Aug. 2, 9 and 16.

Originally, Parks & Rec had planned to stick with its limited-tickets plan no matter what happened with the shifting state regulations. But with all the state restrictions now lifted, that would not have gone over well with the people for whom these summer concerts in the park are a big deal. (hh)