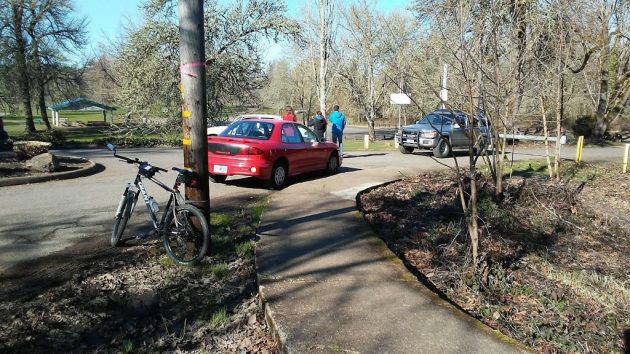 The entrance to Bryant Park remained barred Saturday. The park gates were closed on Feb. 25 because of rising water in the Willamette and Calapooia rivers.

The weather turned fine on Saturday, but automobile access to Albany’s Bryant Park remained closed. That didn’t keep people from using the park for disc golf, time on the playground, or just walking around. They just left their cars outside the entrance, and outside the exit too.

The city closed the park on Feb. 25 on fears of “high and rising water,” according to a public notice it sent out by the “Nixle” alert system. By Saturday, no flooding was in evidence. And the roads through the park were clear. But for some reason the gates remained closed.

If you visit the park on your bike, of course, closed gates are of no concern to you. You just go around them. (hh)

9 responses to “Park closed on a sunny, dry day”