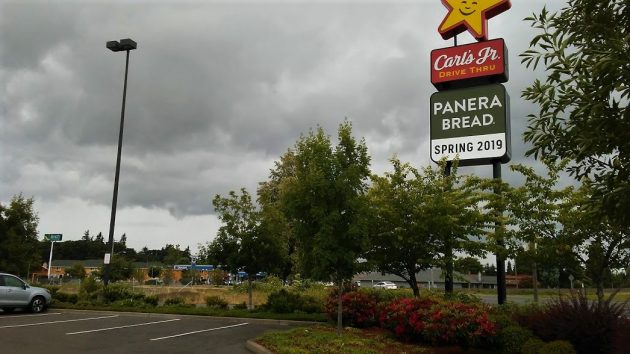 Unlike some other companies, Panera Bread wants people to know early that it’s planning a new outlet. That’s the case in Albany, at any rate, as the photo shows.

It will probably be a year or so before the nationwide restaurant and coffee shop chain opens the new store, off Airport Road S.E. But a big sign is already up, and last week people on Facebook took note.

The city of Albany’s Planning Division does not yet have a site plan or other land-use application for Panera Bread on hand. “However, we anticipate receiving one this summer,” planner David Martineau emailed me when I asked last week.

The new restaurant apparently will occupy the vacant site of the former Tom Tom, at 320 Airport Road S.E. That restaurant was closed for several years before its building was razed in 2013.

The parcel at 320 Airport Road is next door to the 300 address, where there’s a Carl’s Jr. Both parcels are owned by CBT Properties LLC, according to Linn County tax records. The county lists two addresses for the owner, one in Eugene and the other in Lexington, a hamlet in Morrow County.

In April, the Albany Building Division issued a permit for a 10-by-10-foot illuminated sign, valued at $15,000, which joined the Carl’s Jr. sign.

Panera Bread, headquartered in St. Louis, is reported to have about 2,100 outlets. Eugene, Salem, and Corvallis have at least one each. Unless there’s a hitch, Albany gets one in 2019.

A different development in the southeast Albany business district, a new Starbucks and dental clinic under construction on the Santiam Highway at Waverly Drive, generated plenty of unsatisfied curiosity because nothing on the site indicated what was being built. In Panera’s case, judging by the new illuminated sign, a similar problem is not likely to come up. (hh) 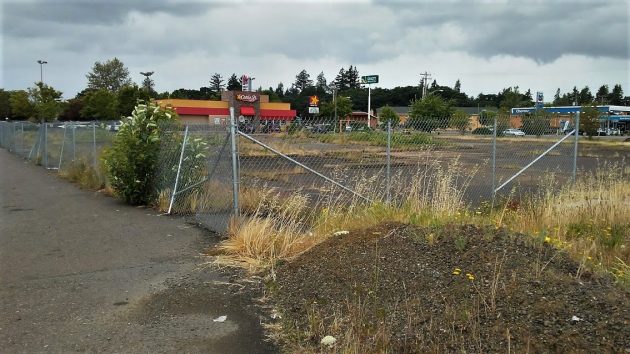 The vacant site of the former Tom Tom restaurant, near the sign announcing a new Panera’s.