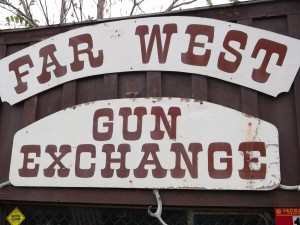 The sign outside a Southern Oregon antique store seems to frame the question: Exchange guns, but for what?

The White House working group on gun control seems to be considering a comprehensive program to abrogate a key liberty in the Bill of Rights, the right to keep and bear arms. That’s the gist of a report in the Washington Post on Sunday. The Post said the working group, headed by Vice President Joe Biden, was “seriously considering measures backed by key law enforcement leaders that would require universal backgroud checks for firearm buyers, track the movement and sale of weapons through a national database, strengthen mental health checks, and stiffen penalties for carrying guns near schools or giving them to minors.”

That’s quite a mishmash of proposals, and not easy to understand because of the vagueness of the summary description. Strengthen penalties for carrying guns near schools — what does that mean? There are no penalties to strengthen.

The main thrust, though, is to spread a web of federal regulation and registration to cover all legal gun owners in America, which means about 45 percent of all U.S. households. The database idea suggests that citizens would be expected to register with the feds before exercising one of the fundamental liberties guaranteed by the Bill of Rights. That would certainly amount to an abrogation of the Second Amendment. It would be similar to requiring people to sign up with a national database to make use of the First Amendment and before writing a letter to the editor.

Assuming for the sake of argument that giving up a fundamental right of citizenship is ever worth the result, what good would these proposals do? No one can seriously believe they would prevent massacres by young men bent on destruction of self and others. Registration, more exhaustive background checks, penalties for giving minors guns, and laws against carrying guns near schools have no meaning at all for someone who — like the Newtown shooter in Connecticut or Kip Kinkel in Oregon in 1998 — murders his parents before going on to commit further crimes. (hh)

From Ray Kopczynski: “That would certainly amount to an abrogation of the Second Amendment.” In this I do strongly disagree.  As a DAV & VFW member, I fully support your/my absolute right to “bear arms.”  However, the framers of the 2nd amendment crafted very concise and very specific words in their elegant statement.  Notwithstanding the discussion that can be held around the meaning of the term “militia,” they consciously wrote “well regulated” PRIOR to all the rest.  That carries massive meaning to me. I perceive no loss of liberty in seriously regulating arms.  I don’t believe it should be more difficult to acquire a drivers license than to get a firearm.