Panel prefers UP as rail route 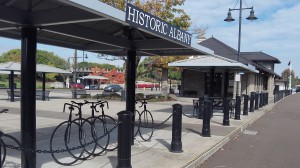 Albany Station is the mid-valley stop on the Union Pacific mainline.

A committee of elected officials has decided plans for expanding passenger rail service in the Willamette Valley should make use of the existing Union Pacific mainline, but it also wants to give additional consideration to routing future trains at least partly along Interstate  5. The planning project’s leadership council, which includes Albany Mayor Sharon Konopa and state Rep. Sara Gelser of Corvallis, met in Salem Tuesday and agreed to move forward with an environmental impact study of using the UP mainline, but also to look into how the I-5 routing option would affect the metro area. The panel dropped the idea of a route through Monroe and Corvallis, as well as one that would use parts of the old Oregon Electric line south of Albany.

People from Corvallis had lobbied for the route through that city, but Gelser said she could support the panel’s decision. At her request, the group’s report will include language on improving Corvallis connections with Albany and Eugene, perhaps with a future spur line or improved “multimodal” connections. “I think there was broad consensus among the Leadership Council that ridership could be improved with better access to rail from Corvallis, whatever form that access might take,” Gelser said in an email.

Passenger rail service between Eugene and Portland, with stops at Albany Station, Salem and Oregon City, now consists of the daily Coast Starlight and two daily round trips of the Cascades trains. Transportation planners hope to cut the travel time and increase frequency of trains. The planning process, budgeted at $10 million, expects to finish with a final environmental impact statement and a route decision in 2016. That would make passenger rail expansion eligible for more federal funds, but there’s no timetable and the general view is that construction of an upgraded rail link in the valley is years or decades away, if it happens at all. (hh)


One response to “Panel prefers UP as rail route”