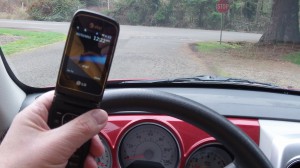 Oregon’s Senate president, Peter Courtney, filed a bill that threatened to fine cell-phoning drivers up to $1,000. This would be accomplished by upgrading the offense — using a hand-held cell phone while driving — from a Class D to a Class B traffic violation. I’m glad to report that the Senate Judiciary Committee has improved the bill, Senate Bill 9.

On March 5 all five committee members, including Republican Betsy Close of Albany, voted to apply the stiffer penalty only to driving while using a hand-held cell phone to send or receive text messages.

The underlying law, though, banning hand-held cell phone use while driving, remains a problem. It exempts drivers of farm and emergency vehicles, as well as tow trucks. They can safely drive while phoning and the rest of us can’t? Amazingly, it also exempts amateur radio operators and people talking on CB radios. It’s really hard to believe that somebody talking with a phone to his ear is more of safety risk in traffic than drivers talking into a radio microphone while chatting with the outside world. And of course, drivers under the law can talk and listen all they want on hands-free cell phones.

In order to text, most people have to take their eyes off the road, so the harsh fine for texting makes sense to me. The rest of the law does not. (hh)