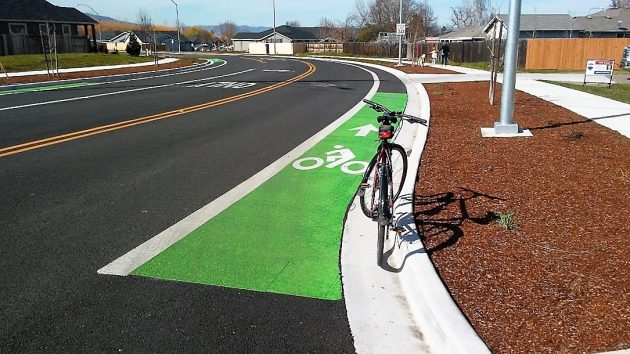 The bike lane at an intersection of Lozier Lane in Medford.

Albany is pretty safe for bicyclists, generally speaking, but it hasn’t yet adopted a simple way of marking bike lanes, an approach that might make the town safer yet.

Riding around Medford, I came across green paint on bike lanes on a relatively new street. What’s with the paint, I  wondered, besides looking decorative? Turns out it effectively reminds drivers to stay out of those lanes, especially when people on bikes are present.

In a transportation-related report for the city of Bend, there’s this explanation: “Green color is now reserved for bicycle facilities by the Manual of Uniform Traffic Control Devices (MUTCD). The purpose is to increase visibility of a conflict area to improve safety and operations through the conflict zone. Solid color is usually reserved to highlight the position of the bike facility while dashed color is used through the conflict zone itself or as guidance through larger intersections.” (The report cites reductions in collisions as a result of the green paint.)

“Conflict zones.” That includes intersections where vehicles go around corners.

The term also covers curved segments where drivers typically edge across the fog line or into the bike lane in order to smooth out their turn. On many Albany roadways, this habit has pretty much erased the white line on right-hand curves. If the space to the right of the line was painted bright green, perhaps drivers would be more inclined to drive around the curve instead of through it.

Green paint would not have prevented the death of a bike rider just outside the Albany city limits in February 2015. And it would not prevent other crashes in which a driver completely loses control because of speed or inattention. But it would do some good in routine traffic around town.

Albany has a Bicycle and Pedestrian Advisory Commission. If they’ve talked about adding green paint to the busier bike lanes around the city, I’m not aware of it. They should consider it, though. Using paint in this way might make drivers and cyclists more aware and courteous in traffic than most them already are. (hh) 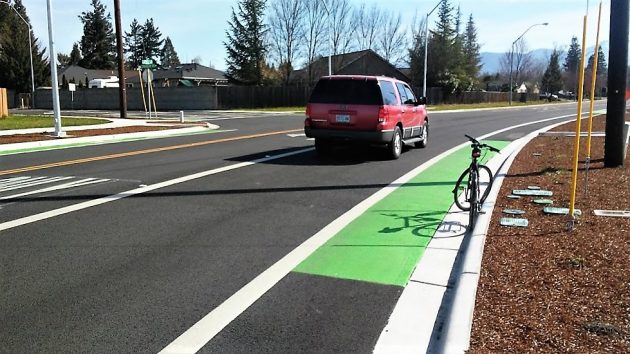 Green paint protects the bike lane in a right-hand curve. 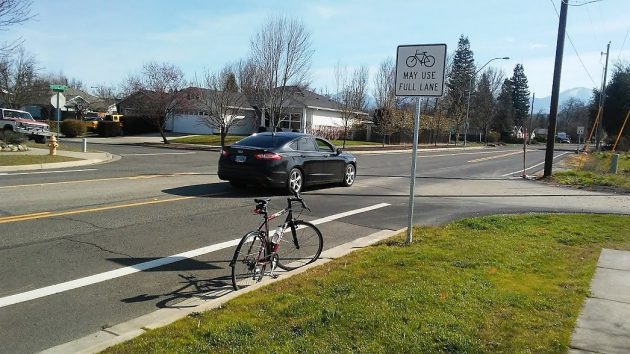 Another helpful thing in Medford: Where the street narrows, bikes may use the full lane.