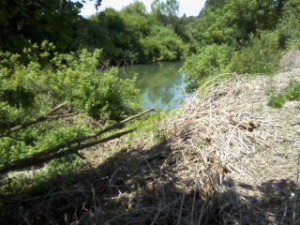 Hard to see how you could get a good-size canoe down there, or back up.

At the mid-valley’s newest state park, the sign on Buena Vista Road promises access by paddlers to the Luckiamute River. There’s a long driveway, some parking spots and even a restroom, but as for access to the river? Not quite.

In May 2012, when I still worked for the Albany paper and occasionally kept an eye on progress at the Luckiamute State Natural Area, park manager Ryan Sparks told me the plans were to complete the access in August and September 2012. Those months apparently are the only time federal agencies allow work to be done on the river, lest any fish be inconvenienced. The plan was to put a floating dock in the stream and a movable gangway on the bank so people could go down to the water with their kayaks or canoes.

But at the time I talked with Sparks, the Oregon Department of Parks and Recreation was still working to get the required permits from the Army Corps of Engineers and NOAA Fisheries. Either they did not get the permits in time or something else happened to delay or cancel the project. In any case, when I checked on June 6, there was no dock in the water and no way to get up and down the bank with a boat.

I’m awaiting an update from State Parks. But for now, if canoeists want to float the Luckiamute before it gets too shallow this summer, they’ll have to put in somewhere else or start on the Willamette River and paddle upstream. (hh)

Update on June 10 from Bryan Nielsen, now the park manager of the Willamette Mission Management Unit: The Paddler Access at Luckiamute is scheduled to be built later this summer at low water.  We wanted to complete the project sooner but had to get federal permits that take a very long time to secure.  At this point the project is on track with the 2013 schedule.