Written May 17th, 2015 by Hasso Hering
Comments: one response.

The state parks department has been planning for years to build a paddlers’ access on the Luckiamute River in Polk County, and maybe this is the year it finally gets done. In the meantime, though, boaters do have a way to get their small craft in the water, as the video shows.

The improved access has always been part of the plans for the Luckiamute State Natural Area, now apparently called the Luckiamute State Park. Where the river access is planned off Buena Vista Road, a parking lot and restroom were put in a couple of years ago, but the launch itself proved a problem. Last year, construction was postponed again because the planned floating dock would have to be removed every winter, and this called for a new and special design.

But as I learned Sunday, boaters don’t have to wait. On a bike ride, I stopped at the access point to see if anything was new. Yes,  there was this sign: 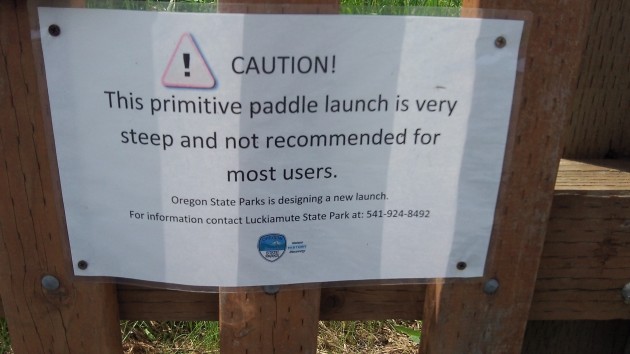 As I was leaving, a pickup arrived with a kayak on top. Evidently these guys would not be stopped by the lack of an approved ramp or floating dock. I asked them if they minded me watching them launch and taking some pictures. They didn’t mind, and the video is the result.

As for launching our canoe there single-handedly, I may have to wait for the actual ramp and/or dock. And the status of that? I’ll let you know when I find out. (hh) 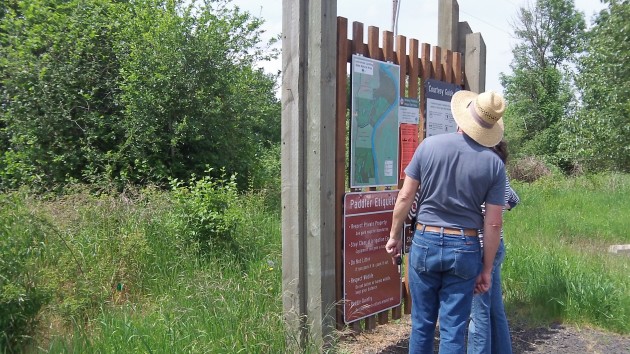 Visitors study the map of the Luckiamute Natural Area at the paddlers’ access parking lot.


One response to “Paddle access? Yes, but it’s not easy”