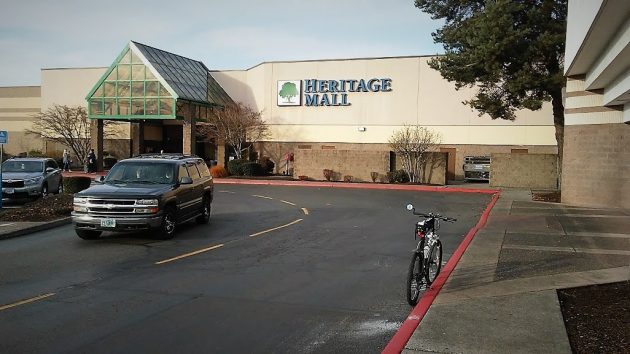 Outside Heritage Mall in Albany on the afternoon of Dec. 13.

The owners of Heritage Mall have asked the city of Albany to approve their plan to subdivide the acreage and break the mall property into five separate lots.

Their application doesn’t give a reason. But according to published reports, mall owners around the country are responding to the loss of big anchors by turning the voids into spaces that attract people for something other than shopping, such as restaurants, fitness centers, or various entertainment venues.

One source I talked to said finding a new use for the former Sears store at the mall would probably be easier if it was its own tax lot separate from the mall, which the proposed division would accomplish.

Since March, the main part of Heritage Mall of about 22 acres has been owned by Namdar Realty Group of Great Neck, N.Y.  The subdivision application lists the owners as Igal Namdar, Matin Hakimi, and Elliott Nassim, all of Great Neck.

In June, the Reuters news agency reported the Namdar group specialized in buying up struggling malls. At the time it owned more than 100 malls and retail centers across the country.

The Albany Community Development Department published a notice of the Heritage Mall application on Nov. 26. Approving the tentative subdivision plat is up to the department’s director. No public hearings are involved.

I wondered whether smaller lots would meet or go against the idea of the “regional commercial” zoning of the mall site. In response, Planning Manager David Martineau told me: “The Heritage Mall subdivision will result in several small lots — not ideal but not prohibited by the Development Code either.” (hh)