Overhead, our not so blue skies 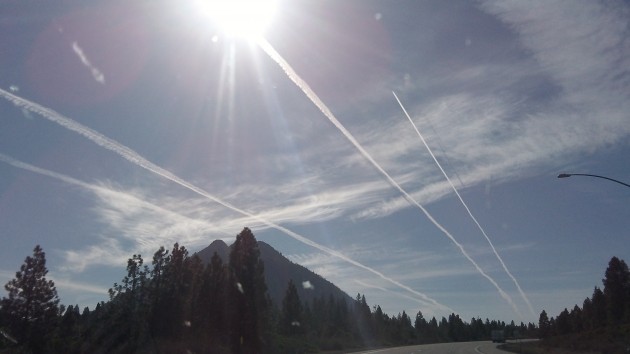 Vapor trails in the previously clear sky above Black Butte in northern California on March 8.

It’s tempting to conclude that all that cloud-making high above us has to affect our weather in some way, such as by diminishing sunlight down here where we live. What’s puzzling is why, in a society as litigious as ours, no one has sued anyone because of it. Perhaps that because it’s hard to determine whom to blame, and even harder to pinpoint any damaging result.

We live in a busy air traffic corridor, the West Coast strip just inside the coastal mountain ranges. What happens is that we start with a nice clear sky in the morning. Before long, though, dozens of commercial flights have traveled north or south, leaving a pattern of vapor trails up there, somewhere above 26,000 feet where the air temperature hovers around minus 40 degree.

And not too much later, on days when atmosopheric conditions are right, some of those trails have spread into a thin layer of cirrus clouds that turns bright sunshine into a kind of haze.

Contrails form when moisture condenses on soot particles in the exhaust of airplane engines. And the Pacific Northwest is particularly susceptible to the formation of these vapor trails because of its moisture-laden air.

Scientists are pretty sure that a profusion of contrails affects the temperature at the surface, where we live, as I read in a story on contrails in rhe Christian Science Monitor. The story appeared about five years ago but is still available online.

The question was whether contrails raised or lowered the temperature on the surface below. A cloud layer would reflect some sunlight and keep it from reaching the ground, presumably lowering thermometer readings ever so slightly. At night, though, the cloud layer would keep some heat from escaping upward, with the result that surface temperatures would not sink as much as with a clear sky.

So it appears that sometimes the effect of all those cloud-forming vapor trails is helpful,and sometimes not so much. Maybe that’s why nobody has thought it worthwhile to sue. (hh)


5 responses to “Overhead, our not so blue skies”