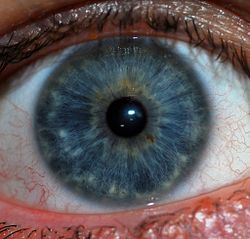 You might not need a PIN if you have an eye…

Lots of stuff going on, all of it bad for personal freedom and autonomy: The Supreme Court says that if the police arrest you for a serious crime, they have the right under the Constitution to sample your DNA as well. The government gets a look at cell phone records handed over by Verizon. Meanwhile, advances in technology have brought us facial recognition software and ways to identify people by scanning their irises. It looks as though the right to be your own person without outside monitoring or control — by either the authorities or corporations — is just about gone.

As usual, there are justifications. Data mining of cell phone records may catch a terrorist. If the authorities have a map of the DNA of everyone ever arrested, catching criminals should become easier. Software that can identify people at a distance might become useful in preventing identity theft and other kinds of fraud.

It might even be convenient. Facing an ATM or a personal computer, you just look into the camera and the machine recognizes that it’s you, without the need for a password or PIN. But then, what happens if somebody hacks your data? I don’t know how that could be done, but if something can be thought of, I think experience shows that eventually it can be done as well.

The fact is that technology is providing ever more powerful tools for individuals to be tracked and controlled, so if you look ahead 100 or 200 years, the outlook for individual liberty is grim. (hh)