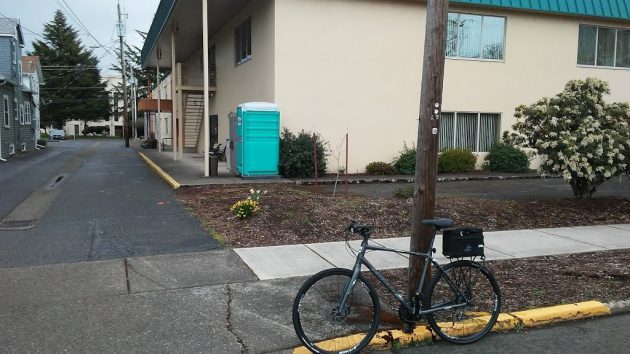 The portable toilet at the First Christian Church, photographed in March after it came to the city’s attention.

The First Christian Church in downtown Albany will be able to keep its outhouse for the homeless, but not without applying for a city permit.

The city council discussed this late into the night on Wednesday. In the end, there were four council members — the required number for any decision — in favor of leaving things alone. They will let the church apply for a one-year permit, renewable annually at infinitum under existing city code language, to keep the toilet in place. The council will act on the permit once the church applies for one.

But how? The city has never issued a permit for a portable toilet. They’ll have to come up with a permit form, Mayor Sharon Konopa said. The city manager said he’ll take care of it.

What about a fee for this permit? “Eleven million dollars!” somebody said. The council had just heard an estimate that the general fund will face an $11 million shortfall in the 2021-23 biennium. This was part of a prolonged discussion, which didn’t go anywhere and plowed no new ground, about ways to cut expenses and raise more money.

Last fall, with support from nearby United Prebysterian Church, First Christian Church installed the portable toilet to give homeless people a place to go and to prevent its preschool “from having to deal with excrement on the grounds.” Albany officials became aware early this year and said the portable toilet was not allowed. But they made no move to have it taken away, pending a report on how other cities dealt with similar issues. That report was presented Wednesday.

Then there was a brief debate, instigated by Public Information Officer Marilyn Smith, over whether the church outhouse, if permitted by the city, must comply with the Americans with Disabilities Act. This went on until somebody pointed out that many of the public portable toilets at city parks and school district sports fields don’t meet that test.

If you want to watch the debate, you can check out the YouTube video of the meeting on cityofalbany.net under “city council meeting materials.”

In a statement to the council, the church’s elders said, in part: “As Christians we are charged with the wellbeing of our neighbors, particularly the most vulnerable: the least of these our brethren. With that charge in mind, when we discovered that our neighbors needed basic sanitation facilities, we put up the port-a-pot. … Our church also does our best to feed the hungry, clothe the naked and provide what comfort we can for the people who live hard lives on the street. Not to address these needs is to increase their degradation when it is within our power to improve their lives.”

In the end, Councilors Bessie Johnson, Alex Johnson II, Bill Coburn, and Dick Olsen took the side of letting the church keep the portable toilet, which sits outside the Washington Street side of its building. Councilors Rich Kellum and Mike Sykes, along with the mayor, fretted about a profileration of portable toilets all over town if the city allows this one.

The story, sad to say, is not over. It will come up again when the request for a permit is filed and then comes up for a formal council vote. (hh)

This story has been revised to make clear that no actual vote took place, and to note that the meeting video is available on the city’s website.