Out of place: Downtown billboard 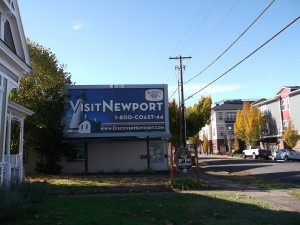 There’s a billboard on East First Avenue in Albany. It’s been there for years. But I hadn’t really paid attention to it until one day this month. With time on my hands, I was wandering around that part of town, on foot for once. And I got to wondering: What’s a billboard doing there? Normally, billboards aren’t allowed on streets like that, I thought. Are they? Right next to a house like that?

I asked David Martineau of the city planning department about it. He says the sign was put up some time before 1992, most likely, and therefore can stay there even though it does not conform to the city’s development code. It sits in the “central business” zoning district, where today free-standing signs can’t be bigger than 1 square foot for every foot of street frontage.

The frontage on this property is 38 feet, so if the sign was put up today, it could be no bigger than 38 square feet. This sign looks pretty sturdy, so it will probably overshadow that part of a downtown street for a good long time even though it would be against the zoning law if put up today.

Here’s an editorial point: Billboards can be helpful on long-distance highways where looking at them keeps you entertained and awake. On city streets, to me they’re useless at best and an unsightly distraction at worst. (hh)

Comment from Emi: “I think you are now searching for things to gripe about since downtown has been ‘homogenized.’ Sure it’s nice, but there really isn’t much personality anymore and it does seem a bit of a monopoly… I notice that billboard every day and have done for years and I really enjoy the Newport (yes, I know it sometimes changes) ad. Makes me remember that a lovely destination is not that far if I just keep driving …no turns! Leave it as it is. It does not stick out and, like you said, is sandwiched between two commercial properties.”

Any reaction, send me an email via the link below.