Our parks: Worth the money 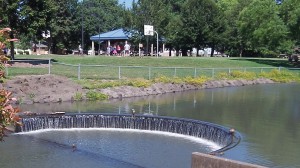 A part of Grand Prairie Park in South Albany.

As far as I’m concerned, a town can never have too many parks. So whether Albany has enough is a tough call. But there’s no question that it has a wide variety of very attractive parks, from the tiny and little-used Eades Park, which has modern play equipment for kids, to the big ones with playing fields and other attractions such as Bryant on the Willamette River and Timber-Linn east of I-5.

The number and wide variety of city parks are living testimony to the work done by the late Dave Clark and his successor as Albany parks director, Ed Hodney, and their teams, as well as the parks commission and the city council. But mainly it’s thanks to the citizens and voters of the town, who established a separate tax levy for parks many decades ago and have been paying it ever since, year in and year out.

The levy is  still reflected in the city’s permanent property tax rate. So it’s possible on a sunny summer’s afternoon to travel around town and see people play pickleball at Hackleman Park, hike a wooded trail at Simpson, launch a boat from Takena Landing, watch kids play baseball at Kinderpark, and throw a stick in the pond for their dog to retrieve at Grand Pairie. They all have different reasons, but all appear to appreciate our public parks. (hh)