Our legacy in oak: Auction coming up 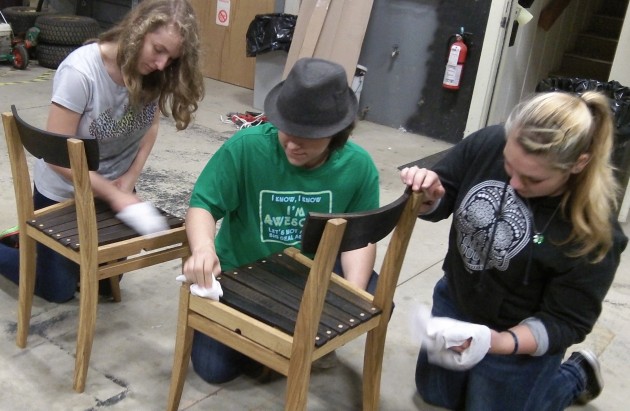 Looking for a handmade piece of furniture linked to Oregon’s natural history? Sunday is your chance to buy one — if you put in a winning bid on any of about two dozen pieces made from the wood of oaks that used to stand in Albany’s so-called Hackleman Grove.

The grove off Oak Street was named for one of Albany’s founding families. Eight trees, between 150 and 270 years old, were cut down to make way for the planned Lowe’s home improvement store and donated to a program that provides wood for high school shop classes. (It’s not clear whether the oaks could have been left standing now that Lowe’s has scaled down the size of its store, which has been delayed one year and now is to be built in 2015.)

A year ago, students and other volunteers used portable sawmills to cut the logs into boards. And since then, woodworkers in the schools and elsewhere have turned them into furniture and items such as bowls, sometimes combining the Hackleman oak with other hardwoods such as maple and walnut.

The results are for sale at the “Lumber for Legacy” auction, which starts at 5:30 p.m. Sunday (Nov. 9)  at the Wheelhouse on Albany’s riverfront. Tickets are $20 and cover a light meal and a beverage. You can reserve yours by calling Albany Parks and Recreation at 541-917-7777. Proceeds will benefit “Sawing for Schools,” the program that makes donated lumber available to shop classes, and the restoration of white-oak habitat in Albany parks.

Mark Azevedo, a member of the Albany Tree Commission and a driving force behind the Hackleman oak project, drew my attention to the benefit. On Monday night, I dropped in on the shop at Timber Linn Park, where he, other volunteers and three South Albany High students finished waxing a dozen cafe chairs made from Hackleman oak.

By the way, acorns from the Hackleman grove were saved. The plan is to plant them in Kinderpark off Oak Street and in the East Thornton Lake Natural Area so that, in a 100 years or so, there will be more stately oaks. (hh) 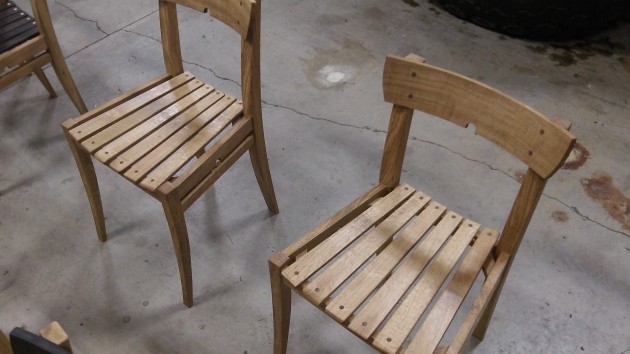