Our bridges: The “scour” concern 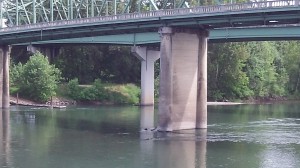 What’s going on under water?

Our highway bridges over the Willamette River are not likely to fall down like the one on I-5 over the Skagit River. That one was of a design where failure of one member causes a collapse, and it got hit by a tall load. But there is one potential concern with the bridges we have in this area: They are vulnerable to scouring, meaning that the river may be undermining the foundations or piles on which the bridges rest.

ODOT inspects these bridges every two years and keeps reports on each. Last summer I obtained the latest inspection reports for some of our local bridges from Bruce Johnson, the state bridge engineer. These reports showed scour-critical ratings of 3 — where 2 reflects “advanced deterioration” and 1 means “imminent failure” — for the Ellsworth and Lyon Street bridges in Albany, the Van Buren and Harrison Street bridges in Corvallis, as well as the Willamette River bridges in Independence and Harrisburg, and the Santiam River bridge in Jefferson.

According to ODOT,  a rating of 3 reflects a “serious condition” and “local failures are possible.” Johnson’s words to me were not that dire, but he said a 3 rating was “not that good.”

The good news? The inspection reports show that ODOT is keeping an eye out to make sure the ratings don’t slip another notch or even two. (hh)